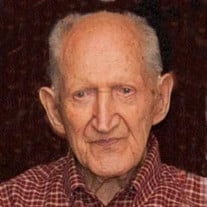 William “Bill” Erdelac, 102 ½, of Portage, passed away peacefully on February 13, 2021. He was born in Detroit, MI on July 31, 1918 and raised in Gary, IN. Of his six brothers, Bill is survived by his baby brother Victor (Dianne) Erdelac of Grayslake, IL. On January 11, 1943, he married Melba Pauline Erdelac who preceded him in death on December 22, 1996. Bill was a machinist for Bucciconi Engineering for 50+ years and coached his sons in Little League Baseball. He loved bowling twice a week, golfing on the weekends and was a longtime member of the Gary Sportsmans Club. He could fix and repair just about anything and passed that skill onto his sons. Family gatherings were always more special with Grandpa sharing stories of his past which took on the form of a history lesson. He will be greatly missed since there were so many stories yet to share. Bill is survived by his loving children; Roger and Renee Erdelac of Polk City, FL, Arthur and Kim Erdelac of Hobart, IN, Charles Erdelac of Portage, IN; grandchildren, Kevin and Holly Erdelac, Deborah and Mike Gowan, Cassandra and Rob Spier, Timothy and Tammie Erdelac, Christopher Erdelac, Michael Erdelac, Katie and Patrick Ciresi, Stacey Erdelac, John Erdelac, Michael and Ra Erdelac; great-grandchildren, Jacob and Skylar, Brittany, Jaden, Emily, Alexander, Brady, Drew, Tyler, Justin and Kaylee; great-great-grandchildren, Sophia, Maci and Maverick. Due to COVID-19, there will be an immediate family only service held on Saturday, February 20, 2021 at Burns Funeral Home.

The family of William Erdelac created this Life Tributes page to make it easy to share your memories.

Send flowers to the Erdelac family.