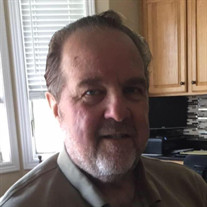 William "Bill" Peter Horbach, born November 7, 1946, and resident of Valparaiso, Indiana passed away December 19, 2020, at the age of 74, after a battle with cancer. Just like he dealt with all experiences in life, William managed his illness with strength and perseverance, and was cared for in his last days by the family and friends whom he loved more than anything. William, or Bill as he was commonly known, beat polio at a young age; before graduating from Lew Wallace High School, and then going on to become a U.S. Army Veteran and a retiree of Bethlehem Steel. Bill was a hard-working husband and father of two children. He pulled dual duty working in the mill and driving tractor-trailer. He always found time for his kids and his passion of working on classic cars, especially his 1950 Chevy. He enjoyed participating in cruise-ins and being around his car buddies. Bill was a dedicated and loving provider to his family, but he was also many other things; he was child of God; a teacher to his son when it came to all things mechanical; a protector to his daughter; an encourager to his children, their friends, and his own friends; he was an example to everyone he knew; Bill had a sense of humor and always spoke with truth; he was an inseparable, loving, and caring husband to the love of his life for 48 years; he was a Grandpa (Papaw) to his two grandchildren; a Patriot for his country, and he was a father figure to his son’s friends who had lost theirs. Bill is survived by his loving wife, Francine, his son Christopher (Christy), his daughter Melissa McCormick (Nate), grandchildren Mason (16) and Scarlett (4), and his brother John. Visitation for Bill will take place on Tuesday, December 29, 2020, from 2:00 p.m., until the time of service at 4:00 p.m., at Faith Fellowship Church, 84 South 500 West, Valparaiso, IN., Pastor David Guess officiating. In lieu of flowers, the family is asking that memorial donations be made to Faith Fellowship Church. Burns Funeral Home (Hobart) entrusted with arrangements. www.burnsfuneral.com.

William "Bill" Peter Horbach, born November 7, 1946, and resident of Valparaiso, Indiana passed away December 19, 2020, at the age of 74, after a battle with cancer. Just like he dealt with all experiences in life, William managed his illness... View Obituary & Service Information

The family of William "Bill" Peter Horbach created this Life Tributes page to make it easy to share your memories.

Send flowers to the Horbach family.