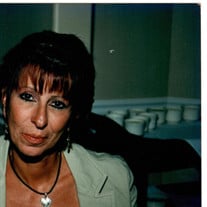 Terry L. Stack, (nee Costley), age 67, of Hobart, passed away August 12, 2020. She was born January 20, 1953 and grew up in Gary, IN. Terry graduated from Wirt High School in 1971. She worked hard her entire life as a legal secretary. Terry belonged to Abate Indiana for 23 years. Upon retiring, Terry’s greatest comfort was just being home enjoying her family and her furry best friends. She was the best wife, sister, and friend anyone could ask for. Terry’s tender heart and giving ways to all that knew her will be greatly missed. She was preceded in death by her parents-William C. Costley, Sr., and Julie Costley; brother-William, Jr.; aunt-Stella Johnson; uncle-Homer Johnson. Terry is survived by her loving husband-Michael; sister-Tammy J. Costley; cousins-James Johnson and Dr. Kristina Johnson. Visitation for Terry will be Monday, August 17, 2020, from 4-8:00 p.m., with a funeral service at 6:00 p.m., at Burns Funeral Home, 701 East 7th Street, Hobart. Interment at Calumet Park Cemetery on Tuesday, August 18, 2020. Family and friends may meet at the funeral home at 9:30 a.m., to proceed to the cemetery. In lieu of flowers, donations may be made to the Hobart Humane Society, 2054 E IN-130, Hobart, IN 46342. www.burnsfuneral.com.

The family of Terry L Stack created this Life Tributes page to make it easy to share your memories.

Send flowers to the Stack family.