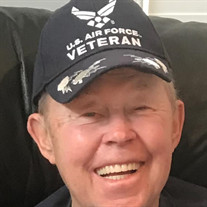 Ted Robert Hansen, “Sr.”, age 77, of Crown Point passed away on Tuesday, January 4, 2022. Ted is survived by his loving wife of 29 years, Dorothy (nee Korba) Hansen; daughter, Cathy (Steve) Pruzin; son Ted (Kathi) Hansen; grandchildren Chad (Sarah) Austgen, Cory Austgen, and Tyler Hansen; great-grandchildren Derek Austgen and Brooke Austgen; and two cousins who were more like sisters to him, Diane (“Joan D.”) Cline and Joy Black, and large family who cherished him. Ted was preceded in death by his parents Clarence and Antoinette Hansen, and brother Clarence Hansen, Jr. Ted leaves behind a legacy of love, friendship, and leadership. He proudly served in the US Air Force as Chief Loadmaster on a C-130 Hercules Aircraft. He was a past board member of Crown Point Babe Ruth and Little League Baseball, he coached Crown Point Panther Football, Little League, and Pups Basketball leagues. He was a longtime member of the Gary Sportsmen’s Club, including serving both on the Board and as Club President. Ted was a true craftsman and skilled, self-taught carpenter who’s core value of, “do it right the first time” and meticulous detail came from his father. After a long career in the car business and being the General Manager of Blaskovich Chevrolet in East Chicago, Ted turned his remodeling hobby into his final career phase, opening Total Home Remodeling, Inc. and left his lasting mark on many who’s homes he improved with that same level of perfection as though they were his own home. Ted was an avid Green Bay Packers fan who loved being with family and friends. Whether a concert, sporting event, or just a backyard cookout at his pool, he never missed a good party. He was so much more than a husband, father, Pa, and friend. He was “everyone’s” dad or grandpa who needed love, guidance, or a helping hand. He wore his United States Veteran hat everywhere he went and was proud to be an American and was most proud of his family. A visitation will be held on Sunday, January 9, 2022, from 12:00 p.m. – 4:00 p.m. at Burns Funeral Home, 10101 Broadway, Crown Point, Indiana. Funeral will take place on Monday, January 10, 2022, at 12:00 p.m. at Burns Funeral Home, Crown Point. Cremation to follow. www.burnsfuneral.com

The family of Ted Robert Hansen created this Life Tributes page to make it easy to share your memories.

Send flowers to the Hansen family.