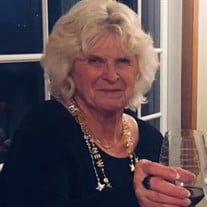 Susan Brown, born Elfrieda Kaiser, of Valparaiso, passed away after a hard-fought battle on January 13, 2022, at the age of 73. Susan is survived by her sons, Stephen (Diane) Brown, and David (Nancy) Brown.; her nieces, Dianna (Scott) Rudd and Joanna Zielinski.; her grandchildren Gabi, Stella, Sydney, Ava, Delainey, Olivia, Lucas, Chris, Michelle, and Catee; her granddog, Ace; and several family members living in Canada. She was preceded in death by her parents, Peter and Susanna Kaiser; her sister Anna Perz; and her brother-in-law, Josef Perz. Susan was born in Linz, Austria in 1948. At the age of four, her family made their way to the U.S. Her family ended up residing in Chicago, IL. She went on to graduate from Immaculata High School, an all-girls catholic high school. After having children, she obtained her college degree from Mundelein College, an affiliate of Loyola University. She went on to pursue a career in journalism. Susan worked for the Post-Tribune newspaper, and, eventually, became President of the Gary Newspaper Guild, only the second woman to do so. She later moved on to work for the Times of NWI where she received numerous accolades for her contributions to journalism. After retirement, she became a committed member and leader of the local and state Green Party movement. She loved reading, coffee, being outside, red wine, beer, live music, anything German, traveling, politics, walking and shopping in downtown Valpo, and, most of all, her grandchildren. She will be deeply missed by all of her family and friends. She could make a connection with anyone who she came across. She was simply the best there ever was! A memorial visitation will be held on Saturday, January 22, 2022 from 1:30 p.m. until the time of the memorial service at 3:00 p.m. at Burns Funeral Home, 701 E 7th St, Hobart, IN 46342. In lieu of flowers, donations can be made to her favorite place, the Valparaiso Public Library. Donations can be made by check payable to “Valparaiso Public Library”. Please include “Susan Brown” on the memo line. Checks can be mailed to Dave Brown, 1754 Wabash Ct., Valparaiso, IN 46385.

Susan Brown, born Elfrieda Kaiser, of Valparaiso, passed away after a hard-fought battle on January 13, 2022, at the age of 73. Susan is survived by her sons, Stephen (Diane) Brown, and David (Nancy) Brown.; her nieces, Dianna (Scott) Rudd and... View Obituary & Service Information

The family of Susan Brown created this Life Tributes page to make it easy to share your memories.

Send flowers to the Brown family.