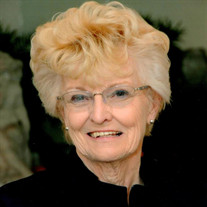 Shirley Ann (Jenkins) Maresko, 83, passed away May 18, 2019, at her home in Colorado Springs, Colorado, surrounded by loved ones. She was born September 22, 1935, in Rensselaer, Indiana to Edward Lester Jenkins, Sr. and Orvena (Grimes-Hershberger) Jenkins. Shirley married James Ervin Maresko, December 2, 1960, in the Independence Hill Presbyterian Church in Merrillville, Indiana. She was baptized in this church and a member for many years prior to moving to Colorado in 1971. She then became a longtime member of the First Presbyterian Church in Colorado Springs. She was a 48-year resident of Colorado, residing in Woodland Park and Colorado Springs. After retirement, her and her husband, Jim, enjoyed being "snowbirds" and owned a home in Sun City West, Arizona. Shirley worked at the Steel Mills, as a librarian, as an aide in a junior high school, an administrative director as several different organizations, and volunteered in her church. For many years she enjoyed being a travel agent, and the benefits that came with it. She traveled the world with her husband James, at locations such as China, Germany, Japan, and Alaska, just to name a few. Shirley loved "garage sales” and collecting antiques and Depression glass. She was also an avid Genealogist, tracing her Jenkins family name back 11 generations, to the year 1583. She was a lifetime member of the Pikes Peak Genealogy Society, among many others including the National, the New England, the Fountain County of Indiana, the Nebraska State, and the Vermont Genealogical Society. She also organized her 50th High School Class Reunion for Merrillville Indiana High School, Class of 1953, all while living in Colorado! Shirley and James were married 59 years; she loved spending time with her family, grandchildren and great-grandchildren. She also loved traveling the world and spending time attending all types of sporting events with her beloved husband, Jim. She is preceded in death by her granddaughter, Kathryn Schubert in 2013; and her two sisters, Dorothy Jenkins Pipas, Peggy Jenkins Burkhart Smith, and brother, Edward Lester Jenkins Jr. Shirley’s husband, James passed after her death, on March 18, 2021. She is survived by her daughters, Kimberly Ann (Joseph) Bosick (from her previous marriage to Don Arnold Conrad); Marla Kay (Thomas) Klasing; and grandchildren, Ryan Schubert, and Alexis and Brandon Klasing; five great-grandchildren; and her two sisters, Nancy Jenkins Rosenbaum, and Carolyn Jenkins Fetkavich, who reside in Indiana. A memorial visitation will take place from 10 a.m. until the time of the memorial service at 11 a.m. on Friday, September 24, 2021, at Burns Funeral Home, 10101 Broadway, Crown Point, Indiana. Immediately following is a processional to her final resting place in Calumet Park Cemetery, 2305 W. 73rd Avenue, Merrillville, Indiana. This is close to where James and Shirley both grew up as children. James and Shirley will both be laid to rest appropriately, side by side, just a short mile from the home where Shirley’s father built her childhood home, and the church where her and James were married. The family requests in lieu of flowers, contributions in Shirley's memory may be made to the Alzheimer's Association at: alz.org

Shirley Ann (Jenkins) Maresko, 83, passed away May 18, 2019, at her home in Colorado Springs, Colorado, surrounded by loved ones. She was born September 22, 1935, in Rensselaer, Indiana to Edward Lester Jenkins, Sr. and Orvena (Grimes-Hershberger)... View Obituary & Service Information

The family of Shirley Ann Maresko created this Life Tributes page to make it easy to share your memories.

Send flowers to the Maresko family.