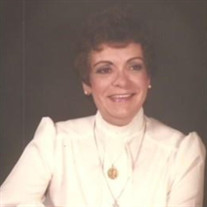 Sheila Ann O’Toole, age 85 of Merrillville, passed on March 24, 2021peacefully in her sleep. Sheila was born in East Chicago on May 7, 1935 to Bern and Leota O’Toole. She was raised in Highland, Indiana, and graduated from Griffith High School, class of 1953, and went on to receive a bachelor’s degree from Purdue University in 1957. She was a member of the Alpha Xi Delta sorority at Purdue and was an active alumnus at the time of death. Sheila retired after a successful career from Illinois Bell/AT&T after more than 25 years and subsequently made her home in northwest Indiana where she enjoyed her many friends and family. She loved gardening and was a long-time member of the Brantwood Garden Club and achieved the status of Master Gardener. She also loved collecting teddy bears and was affectionately known as “SheBear.” Sheila is survived by her three children: Sue (Jim) of Coatesville, Pennsylvania, John (Jane) of Crown Point, Indiana, and Jim (Deb) of Grosse Pointe Farms, Michigan. Sheila also leaves behind 12 grandchildren: Ashley, Riane (Brett), Peter (Abi), Erica (Nick), Alicia, Rachel (Eric), Kristi (Brandon), Alexandra (Leif), Daniel, Jacob, Jamie, Jacey and 8 great-grandchildren. The visitation will take place on Saturday, April 3, 2021 from 2 p.m. until the time of the funeral service at 4 p.m. at Burns Funeral Home, 10101 Broadway, Crown Point, IN Rev. Peter Muha officiating. Services will conclude at the funeral home. www.burnsfuneral.com.

Sheila Ann O&#8217;Toole, age 85 of Merrillville, passed on March 24, 2021peacefully in her sleep. Sheila was born in East Chicago on May 7, 1935 to Bern and Leota O&#8217;Toole. She was raised in Highland, Indiana, and graduated from Griffith... View Obituary & Service Information

The family of Sheila Ann O'Toole created this Life Tributes page to make it easy to share your memories.

Send flowers to the O'Toole family.