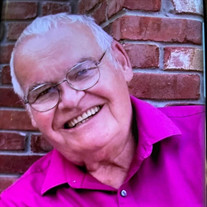 Ronald Dean Travis, age 80, of Cedar Lake, Indiana passed peacefully, on October 12, 2021. He was preceded in death by his parents, Ben and Gertrude Travis, his brother, Jack and sisters, Mary Arnold, Jerri Ide, Myra Raila, Joan Herman, Donna Stoll, Nancy Matthews and Lynn Wardingly. Ron is survived by his wife of 59 years, Patricia Travis; children, Therese (David) Fulton, Tammi Travis, Donald (Kimberly) Travis, and Traci (Joseph) Deakin III; thirteen grandchildren and six grandchildren-in-love: Andrew (Rachel) Fulton, Aaron (Milata) Fulton, Daniel (Courtney) Justice, Alissa Fulton Englert, Joshua (Sarah) Deakin, Andrew (Kacie Kinkade) Travis, Hannah (Zach) Wamper, Dayna Justice, Jacob Deakin, Adam Travis, Sarah Travis, Nathan Travis and Jennifer Fulton; three great-grandchildren Grayson Englert, Evelina Englert and David Abraham Fulton. He is also survived by one brother, Lee Travis. Ronald was a father figure to many, notably to two of his bonus-adopted sons, H. Donald Spiares (nephew and Navy protege) and John Svientek, along with a host of nieces and nephews that he adored. Ronald was a Navy veteran (USS Prairie) and retired from the railroad - his heart belonged to the Rock Island, however he retired from CSX Railroad. His greatest passion was fishing, with most recent trip to Lake Kabetogama-Namakan, Minnesota catching a haul of northern pike, along with white bass fishing in Fremont, Wisconsin for numerous years. Ron was heavily involved in Scottish Rites, Medinah Shriners, Masonic Hall/Eastern Star, VFW and American Legion. Ron never met a stranger, making friends wherever he went never missing an opportunity to tell stories about both the Navy, railroad or fishing. He was labeled with many titles, as we reflected on his life. Feisty, protector, brave, stubborn; however, if you knew Ron, he was a teacher. He had a drive in him to teach people life lessons, not book smart, but hard life lessons. Lessons he, himself, learned through the hard life he grew up in. He was a friend to all and giver of himself. Family was number one! He loved his blood family, though loved extended family and friends and those that became family through marriage. He was a Godly man. No words can describe the hole in all our lives that he has left. Many family and friends were able to call and tell him how much he was loved in his last hours on this earth. There will be no services, a family memorial to be held later. Burns Funeral Home, Crown Point entrusted with arrangements. www.burnsfuneral.com

The family of Ronald Dean Travis created this Life Tributes page to make it easy to share your memories.