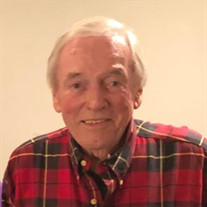 Ronald George Eisenhauer, of Crown Point, Indiana passed away December 10, 2020 at The William J. Riley Memorial Residence of the Hospice of the Calumet Area in Munster, IN. He is survived by his wife, Linda Ann Grube, of 59 years, and his only child, Donald J Eisenhauer (Mary Jane) and 3 adoring grandchildren Frannie, George and Hattie, all of Beverly Shores, IN. He is also survived by Diane Thalmann Stanton of IL and FL, other Thalmann cousins in Wilmette area, 3 sisters-in-law, Carolyn Rucker of Wilmette, IL, Martie Roehm of Lake Barrington, IL, Jane (Jim) David of Logansport, IN, and 10 nieces and nephews. Ron was born August 7, 1935 in Evanston, Illinois. He was an only child of Clarence and Jewel Eisenhauer. Ron is a 3rd cousin of President Dwight D. Eisenhower. He attended St. Joseph Catholic School in Wilmette and New Trier High School. He graduated as a history major from Northwestern University in 1958 where he met Linda. Ron was a member of Kappa Sigma Fraternity on campus. Ron was in the National Guard, got married in Logansport 1961, then moved to Atlanta to work in the insurance industry. In 1962, Ron became President of Standard Liquors, Inc. in downtown Gary and remained its CEO until 1987 in Merrillville, IN. From then until 2005 Ron was VP of Operations for National Wine & Spirits out of Indianapolis with locations in Illinois and Michigan. Ron served as Board of Directors of Bank of Indiana, then Bank One which became Chase as well as President of the Merrillville Planning Commission and VP of Merrillville Board of Zoning Appeals. He was President of the Indiana Wholesale Liquor Association. Other organizations within which he was involved with were University Club, the Indiana Society of Chicago, Northwestern’s John Evans Club, many Northwestern class reunion committees, and the Gary Jaycees. Ron was an avid golfer at Gary / Innsbrook Country Club for 52 years and a past Board Member. His beloved golf group played every Thursday, Saturday, and Sunday! He loved attending Chicago Cubs and Bears games with his best friend. Ron rarely missed a home Northwestern football or basketball game in nearly 60 years. That was a lot of driving each way from Crown Point to Evanston, and he knew all the short cuts. He and Linda have been Wildcat Fund Benchwarmers forever and bleed purple for their Wildcats. Speaking of cats, Ron had 7 felines over his years that counted on him every day in Lakes of the Four Seasons. Those cats were his best pals. In his spare time, Ron’s hobbies included electrical projects at friends’ homes & cottages; boating on Lake Holiday; taking care of his yard; attending Northwest Indiana Symphony concerts; and taking naps – lots of them! He so enjoyed reading the Chicago Tribune and Wall Street Journal daily. His friends from across the U.S. are loyal to him and Linda, and he relished that fact. Private funeral service will be held at Burns Funeral Home, Crown Point. Interment Historic Maplewood Cemetery, Crown Point. A Celebration of Life will be held next year on Ron’s birthday in August. Donations in Ron’s memory may be made to Northwestern University Athletics, c/o Wildcat Fund, Attn: Fred Smith, 28274 Network Place, Chicago, IL 60673. Or, Hospice of the Calumet Area, Attn: A. May, 600 Superior Drive, Munster, IN 46321. www.burnsfuneral.com

Ronald George Eisenhauer, of Crown Point, Indiana passed away December 10, 2020 at The William J. Riley Memorial Residence of the Hospice of the Calumet Area in Munster, IN. He is survived by his wife, Linda Ann Grube, of 59 years, and his only... View Obituary & Service Information

The family of Ronald G. Eisenhauer created this Life Tributes page to make it easy to share your memories.

Send flowers to the Eisenhauer family.