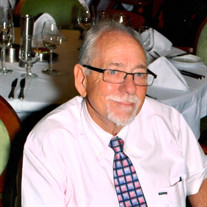 Robert "Bob" Zemburski, age 75 of Hobart, IN, passed away Tuesday August 4th 2020. He is survived by his two sons, Jeffrey (Kelly) Zemburski of Crown Point, IN and Matthew (Paige) Zemburski of Chicago, IL., sister Rita (Cherie) Zemburski of The Villages, Florida, and Ethan Zemburski his beloved grandson, Ethan was his pride and joy, whom he loved and adored more than anything in this world. Robert spent the last years of his life in a loving and supportive relationship with Madeleine Deslauriers. He was preceded in death by his parents, John and Agnes Zemburski of East Chicago, IN. Robert was born in East Chicago, IN, where he attended and graduated from East Chicago Washington High School, class of 1963. After graduation, he proudly served in the United States Marine Corps as a combat engineer. Upon his return from the Marine Corps., he eventually began his career with Trailer Train Company (TTX), a railroad company, where he worked for over 25 years and from where he retired. But he wasn't quite finished working just yet. After retiring from TTX, Robert focused on his education, completing master's degrees in both business administration and social work. With those two master's degrees under his belt, Robert began working at Edgewater Behavior Health Services and then the Lake County Indiana Juvenile Justice task force, where he mentored and helped at-risk adolescents. Music and drumming was a life long passion of his. Robert took his love for drumming and became a founding member of the Blue Angels, a local band that played rock and roll throughout the region beginning in the 1960's. Through music, Robert formed lifelong friendships. No one was a stranger for long with Robert, he was incredibly warm, friendly, hilarious, and witty; and quick to tell you that he once played drums for Chuck Berry for one magical evening many years ago. He loved magic, and loved doing his tricks for anyone who would give him an audience, even if the tricks themselves didn't turn out the way he intended. He was an amazing man, and a wonderful human being. There will never be another "Bobby Z" We love you dad, brother, grandpa, and friend. We'll miss you always. "Who loves you more than me?" (nobody), "What's the best day of my life?" (the day I was born), "Always remember, don't worry about anything." Memorial visitation Monday August 10, 2020 from 4-6 pm prior to Memorial service at 6 pm at Burns Funeral Home, 10101 Broadway, Crown Point, IN. www.burnsfuneral.com

The family of Robert John Zemburski created this Life Tributes page to make it easy to share your memories.

Robert &quot;Bob&quot; Zemburski, age 75 of Hobart, IN, passed away Tuesday...

Send flowers to the Zemburski family.