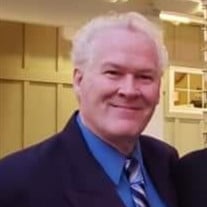 Robert K. Huish, age 61, of Crown Point, IN passed away on Tuesday March 16, 2021. He was born in Chicago, IL. He is survived by his loving wife of 39 years Josephine M. (nee Echterling), two daughters Heather Huish and Brittany (Ryan) Dietrich, two grandsons Charlie and Lucas Dietrich, his Mother Marjorie Huish, one brother Lance (Lisa) Huish, two sisters Carol (Ray) Tristain and Kathy Huish, and many nieces, nephews, great nieces, and great nephews. He was preceded in death by his grandparents, Father Robert E. Huish, and nephew Robbie Huish. Rob owned Roma Pizza for 10 years and later owned a Jay’s/Snyder’s distribution route. An avid bowler, he bowled four perfect games during his career. He was also a softball coach for his daughters for many years. His coaching brought many families together and fostered friendships that still thrive today. Above all, Robert had a powerful devotion to his family. The unrivaled hero of both his daughters, his love and strength helped him fight his Kidney cancer for over a year. His wit and sense of humor did not waiver, even at the end. A memorial visitation will be held on Sunday, March 21, 2021 from 12 p.m. until the time of the memorial service at 5 p.m. at Burns Funeral Home 10101 Broadway, Crown Point, IN. Deacon Dale Walsh officiating. In lieu of flowers, donations may be made to Hospice of Calumet Area or the Kidney Cancer Association. For additional information please contact Burns Funeral Home and Crematory by calling 219-769-0044 or visiting us at www.burnsfuneral.com

The family of Robert K. Huish created this Life Tributes page to make it easy to share your memories.

Send flowers to the Huish family.