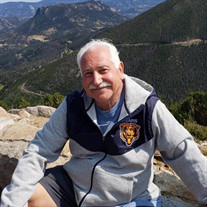 Robert (Bob) Lietz AKA Papa, age 72 of Crown Point, IN earned his heavenly wings on July 10, 2021. He was born on the Southeast side of Chicago, IL and a long-time resident of Lakes of the Four Seasons, IN. A tried-and-true Bears fan, Bob was a retired boilermaker from Local 374 and loved going to the yearly boilermaker picnics and was proud to bring his grandkids. Bob enjoyed fishing and teaching his grandchildren how to fish and going to Florida with his wife for the Winter. Bob loved country dancing, so much so that he often went alone until he met Carol there, the love of his life and proposed right there on the dance floor. He loved his dogs, walking the dogs and spending time with family and friends. One of his favorite things to do was to sit on his patio and watch the lake, the birds, and the boats and all of the people. He was truly content with his life; we learned a lot from Papa and we could’ve learned a lot more. He will be missed beyond words, our hearts are broken, our lives are shattered, we will always love you and we will never forget you. He was preceded in death by his father, Lester Lietz, his mother Antoinette (Maugeri) Lietz; brothers, Bart (Marilyn) Lietz, William Lietz, and sister Annette Lietz. Survived by loving wife, Carol (Herman) Lietz, beloved sister, Roseanne (Mike) Porter, brother Lester Lietz, son, James (Carrie) Lietz, daughters Adrienne (Chuck) Loy, Dana Horan, stepchildren Deanna Whiteside and Bobby Kentrick Jr. and grandchildren, Harley, Noah, Kyle, Hannah, Grace, Lane, Dylan, Olivia, Landen, Jackson and Aydin. And a great many cousins, nieces and nephews and countless friends. A memorial visitation will be held Saturday, July 24, 2021, from 10 a.m. until the celebration of life at 1 p.m. at Burns Funeral Home, 10101 Broadway, Crown Point, IN. Contributions may be made to the Cancer Research Foundation in Bob's memory. www.burnsfuneral.com.

Robert (Bob) Lietz AKA Papa, age 72 of Crown Point, IN earned his heavenly wings on July 10, 2021. He was born on the Southeast side of Chicago, IL and a long-time resident of Lakes of the Four Seasons, IN. A tried-and-true Bears fan, Bob was... View Obituary & Service Information

The family of Robert "Bob" Lietz created this Life Tributes page to make it easy to share your memories.

Send flowers to the Lietz family.