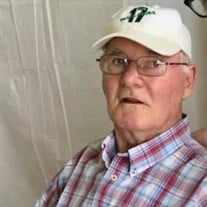 Richard (Dick) O’Reilly 83, of Burns Harbor, passed away peacefully at home, surrounded by his family, on June 15th, 2021. He was born to William and Francis O'Reilly on January 29th, 1938 in Joliet, IL. He graduated from Emerson High School in Gary, Indiana in 1955. Dick served in the Marine Corps from 1955-1959. He was a retired member of Heat & Frost Insulators, Local 17. He married his beloved wife Dolores of 58 years on October 19th, 1963, and together they raised three sons. Dick was a devoted grandfather and was affectionately known as “Papa.” He was an avid Chicago Cubs fan and enjoyed doing crossword puzzles with an ink pen. Dick was also known for his quick wit and willingness to lend a helping hand. Dick is survived by his loving wife Dolores (Benjamin) O’Reilly of Burns Harbor, IN; his children Thomas (Libby) O’Reilly, of Cheyenne, WY, Timothy O’Reilly, of Portage, IN, and Daniel (Susanne) O’Reilly, of Chesterton, IN; grandchildren Aaron O’Reilly (Eddie Castellanos), Richard O’Reilly, AJ (Lauren) O’Reilly, and Marcus (Kristin) O’Reilly; great-grandchildren Everly, Aiden, and Fitz; and many nieces and nephews. He is preceded in death by his parents William and Francis O’Reilly, brothers Bill and Jim O’Reilly, sister Patricia Stafford, and his beloved granddaughter Jenna O’Reilly. Visitation will be on Monday, June 21, 2021, from 3:00-7:00 p.m. and Funeral Service will be on Tuesday, June 22, 2021 at 10 a.m. at Burns Funeral Home, 701 East 7th Street, Hobart, IN. Interment at Calumet Park Cemetery. www.burnsfuneral.com.

Richard (Dick) O&#8217;Reilly 83, of Burns Harbor, passed away peacefully at home, surrounded by his family, on June 15th, 2021. He was born to William and Francis O'Reilly on January 29th, 1938 in Joliet, IL. He graduated from Emerson High... View Obituary & Service Information

The family of Richard "Dick" Paul O'Reilly created this Life Tributes page to make it easy to share your memories.

Send flowers to the O'Reilly family.