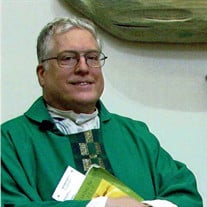 Father James W. Meade passed away suddenly October 28, 2020. He was born April 12, 1960, the son of James H. and Mary P. (nee Currie) Meade. He attended St. Joseph Catholic Grade School, Dyer, Indiana and was a 1978 graduate of Lake Central High School. Father Meade attended seminary at St. Meinrad College pursued his theological studies at the University of St. Thomas Aquinas while residing at the Pontifical North American College in Rome, Italy. He was ordained a Catholic priest in 1986. He furthered his education as an adult and received his law degree from Indiana University. In his many years in the priesthood Father Meade had numerous assignments in the Gary Diocese, the latest serving 16 years as pastor at St. Patrick’s, Chesterton and the past 2 years as pastor of SS. Peter and Paul, St. Joan of Arc, and St. Andrew’s in Merrillville. He held many positions in the Diocesan Marriage Tribunal, currently serving as Judicial Vicar of the Diocese. Father Meade was preceded in death by his parents, Jim and Mary. He is survived by his sisters, Grace (Dennis) Mertes, Laura (Callie) LaVal, niece, Lindsey LaVal, his fellow priests, and all his parishioners and friends who knew and loved him. A memorial mass will be held Friday, November 6 at St. Peter and Paul Church. Unfortunately, due to COVID, seating will be by invitation only. Father Meade’s greatest joy was serving his parishioners. And so as he would say “and so on and so forth.” Burns Funeral Home, Crown Point, entrusted with arrangements www.burnsfuneral.com

The family of Rev. James W. Meade created this Life Tributes page to make it easy to share your memories.

Send flowers to the Meade family.