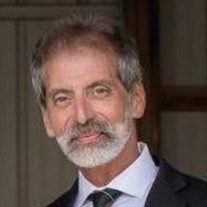 Randy Layne Hartsell, of Hobart, Indiana, who was born in Detroit, Michigan, was relieved of his earthly duties on June 11, 2021. Leaving behind his treasured Martin and Ovation guitars he would play for hours on and off each day (usually when his wife was trying to watch a favorite television show), a bag of prized golf clubs he either cursed at or kissed, depending on the game he had just played, and 3 cases of Callaway golf balls (soft because he didn’t like his balls hard). Also, five jars of reduced fat Jiff peanut butter he lovingly would hug a jar and recite, “peanut butter is the secret of life”. He also left a bowl of small rocks, acorns, and pine cones that he collected on his business travels that almost got thrown out as trash, when Randy exclaimed it was a bowl of precious memories. Randy is survived by his extremely patient wife Lee (a month shy) of 15 years, who according to Randy wished he had met her before the other two! Randy is survived by two sons and one daughter: Brian Joseph (Kristina) Hartsell, Ray Hayden (Megan) Norris, and Bayle Rae (Corey) Nimtz; 3 grandchildren: Lucas Donovan Hartsell, Raegan Greigh & Trace Hayden Norris. Randy is preceded in death by his parents: Joseph Rawls Hartsell, Ramona Loretta Josie, and sister, Pamela Jo Hartsell. Randy graduated with honors from Allen Park High School, in Allen Park, Michigan where he was voted “SHYEST GUY” during senior awards. After his graduation he moved out of his parents house with everything he had that fit in the back of his 70 Fastback silver Mustang, including his elegant cardboard box dining table. Randy celebrated 45 years as a Top Sales Manager for Hilti Corporation (a job he thought he’d do for the summer). There he accumulated a box full of awards for top sales, that he was too humble to ever put on display. Randy enjoyed many things: playing the guitar, golfing, snow skiing, hunting with his buddies, partying in the 70s, 80s, and 90s. Attending concerts, theaters, and comedy clubs like Second City. He loved all the Avenger movies except for the Endgame, he said it was “Lame”. He also liked; Beauty and the Beast (with Bayle), Star Wars, Star Trek, Lord of the Rings, TV shows like; Wild Wild West, Dancing with the Stars (because of the ladies costumes), Hell’s Kitchen, Star Trek, The Twilight Zone, The Good Doctor, Game of Thrones, Lucifer, the History & Science Channels and most recently Outlander. He could play and enjoyed music of all genres and eras especially, John Mayer, Jason Mraz, Sade, Beetles, “Beautiful” by Ed Sheeran and many, many more! But no rap or head banger music please! His favorite snacks were: Instant Maple Brown Sugar Oatmeal, Lucky Charms, Lee’s Chocolate Walnut Fudge, Little Debbie Snack Cakes, Frosted Flakes, Stouffer’s Dinners, Banquet Pot Pies, Captain Crunch, can cheese on a Ritz Cracker and of course his beloved Jiff Reduced Fat Peanut Butter on Ritz Crackers. Now he wasn’t eating reduced fat peanut butter for health reasons. He found when he put it on crackers, it was the prefect consistency that wouldn’t squish off the crackers. Randy was very “Sheldonic” in many respects, which he realized how much he was like the character Sheldon, when watching one of his favorite TV shows “The Big Bang Theory”. He enjoyed breakfast or lunch at Cracker Barrel, Viking in Valpo, or Café 339 in Hobart. His all time favorite restaurant delight was the Hot Fudge Ice Cream Cake at Big Boy Restaurant. He would drive over an hour, a few times a year, to St. Joe Michigan to partake of the delicious dessert. Visiting Big Boy has become a family tradition! Eat the cake and get a photo with the Big Boy outside the restaurant! He loved watching Golf, Chicago & Detroit sports, red roses, the color red, coffee, smoking, did I mention golf? He loved his wife and children deeply, but Sally was his dream girl. His 2017 Burgundy Red Mustang Convertible, he lovingly stroked and cared for until, for practically after he retired, he traded her in for Pearl, a Pearl White, Hyundai Sonata. He purchased a used burnt orange Ford Ranger for hauling stuff and so he could run free again. Randy loved to talk, a lot, but mostly he loved spending time with his family. Randy passed knowing “Field of Dreams”, was his favorite movie (because of his dad), The Muppet Christmas Carol & Christmas Vacation are the best Christmas movies made, Tiger Woods is the greatest golfer on the planet, Steve Reeves was the premier weightlifter of all times, and lots of salt must be added to food, with no need to taste it first. Randy will be missed by all who knew him for his corky sense of humor, loyal & kind heart, and his childlike Christmas Spirit! Family & Friends are invited to come for a Potluck Buffet and Celebrate Randy’s Life at the Barrington Ridge Clubhouse: 780 Bracken Parkway, Hobart, IN 46342 - 2:00 to 7:00 p.m.- Saturday, July 10, 2021 Please bring your favorite dish and fun stories to tell, of your adventures with Randy! No flowers please, if you wish, a donation can be made to Autism Speaks in honor of his grandson Lucas. Burns Funeral Home (Hobart) entrusted with arrangements. www.burnsfuneral.com.

Randy Layne Hartsell, of Hobart, Indiana, who was born in Detroit, Michigan, was relieved of his earthly duties on June 11, 2021. Leaving behind his treasured Martin and Ovation guitars he would play for hours on and off each day (usually when... View Obituary & Service Information

The family of Randy Layne Hartsell created this Life Tributes page to make it easy to share your memories.

Randy Layne Hartsell, of Hobart, Indiana, who was born in Detroit,...

Send flowers to the Hartsell family.