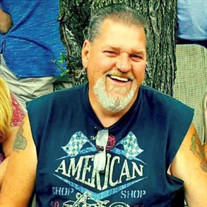 Randy Eugene Ford passed away at home on August 3, 2020, surrounded by family and friends, after a lengthy battle with bladder cancer. Randy was born to Robert Meredith Ford and Dorothy Jean Cox-Ford on October 2, 1954 in Boone County Indiana. He already had a big sister, Patrina Jo (Harold), big brother, Ricky (Connie), and soon after Randy, a little sister, Jerri Lynn (Ray) to tease. Randy attended Granville Wells School in Jamestown, IN until his junior year and graduated from Ben Davis High School in Indianapolis in 1973. He went on to complete his auto mechanic certification from Lincoln Technical Institute in 1974. Randy, aged 17, met Judith Ann, (Judy) Jones, aged 15 the summer of ’72 when he noticed Judy in her “hot pants.” Even though he sang to her “Baby, Baby Don’t Get Hooked on Me” as it came on the radio while cruising in his 1964 Mercury Comet, Judy was the love of his life and on February 8, 1975, Randy and Judy were “hooked” in Hobart, IN during a snowstorm. Randy and Judy have often been told their marriage has been the example for what others want their marriage to be. Randy and Judy went on to have 3 daughters, and they are, in Randy’s comical words, - Beverly (Zacary) Garland, his pride and joy, Jamie Covelli, (Jason Levenson), the one he wanted, and Michelle (Ryan) Michniewicz, the “Oh well” baby who, her sister’s say, was his favorite. For over 45 years Randy spent his life under the hood of a car, 40 of which were at Christenson Chevrolet in Highland, IN. Randy’s Christian faith and Godly upbringing were reflected in his heart to serve others in any capacity, expecting nothing in return. Any time anyone had a need, Randy was the first to jump to help. Randy enjoyed his family and friends, camping, NASCAR, corn hole, and making sure you knew never to trump your partner’s ace in a beloved game of euchre. If you were a friend of Randy’s you were considered his family, especially, if you brought him ice cream which you knew was being enjoyed when he twirled the spoon. Randy also cherished being a Papa. So much so that he chose to step into a fatherly role and raise his oldest grandchildren Adella Covelli and Sebastian Ford. Five other grandchildren got to call him Papa - Isaiah, Lucas, Odin, Juno, and Eira as well as a Bonus Papa to Caitlin, Conner, Daniel, Adalyn and another baby girl on the way. He is imagined to be in Heaven wearing his favorite Rat Fink shirt, riding around in a 1940 Willys Coupe on his way to his favorite spot at Broadview Acres Campground. Randy’s family would like to thank the precious people who have loved and supported them during their journey. Graveside services are open to family and friends and will be held at 11 a.m. CST on Saturday, August 8, 2020 at Pisgah Cemetery in New Ross, IN. Directions can be found at https://maps.app.goo.gl/eVkgzwYWh1bRnChk6 A Celebration of Life will be held in Hobart, IN at a later date. In lieu of flowers, the family is requesting donations be made to Judy to assist in expenses. Donations may be sent to Burns Funeral Home 701 E. 7th St., Hobart, IN 46342 or made through Cash App $Precious1956

Randy Eugene Ford passed away at home on August 3, 2020, surrounded by family and friends, after a lengthy battle with bladder cancer. Randy was born to Robert Meredith Ford and Dorothy Jean Cox-Ford on October 2, 1954 in Boone County Indiana.... View Obituary & Service Information

The family of Randy E Ford created this Life Tributes page to make it easy to share your memories.

Randy Eugene Ford passed away at home on August 3, 2020, surrounded...

Send flowers to the Ford family.