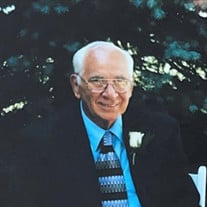 Ralph Gargano, age 94 of Crown Point, passed away Monday, January 17, 2022. He was born on July 6, 1927 in Hammond, Indiana to Tony and Anne Gargano. Ralph attended Hammond Tech where he learned his lifelong trade as a machinist. He also served In the U.S. Navy during World War II. Ralph is survived by the love of his life- Gwen Harmon whom he married on April 7, 1951; his four children- Mike Gargano (Sue), Tony Gargano (Gale), Lynda Warne (J.R.) and Laura Gargano; 7 grandchildren- Eric Gargano, Brad Gargano, Tony Gargano, Christina Sideris, David Warne, Laura Brazil and Madalyn Warne; 15 great grandchildren; and numerous nieces and nephews. He was preceded in death by his grandson Joe Gargano. Ralph dedicated nearly 50 years to the Nau family as a machinist where he retired from Hammond Machine in 1988. He was an athlete who shared his passion for sports with his family. He was either coaching or cheering his children and grandchildren from the sidelines. When he wasn’t on the sports field you were sure to find him in his garden or with a fishing pole in hand, playing cards and spending time with his family. He was a member of Isaac Walton, American Legion, the YMCA, and belonged to Saint John Bosco Parish in Hammond. He touched every life he encountered. From the woman working the deli, to the garbage man & mail man. He took the time to get to know everyone he encountered & created so many lasting relationships because of it. He was loved by SO MANY because of the kindness & thoughtfulness he generously passed out. He’s been an example to all of us on how to live a life with gratitude and love and kindness. He was the greatest measuring stick. That love & kindness he dispensed to everyone (and raised his kids & grandkids to see) is his greatest legacy. We will all miss him dearly. Visitation will take place on Sunday, January 23, 2022 at Burns Funeral Home, 10101 Broadway, Crown Point, from 2 p.m. until the time of the funeral service at 6 p.m. www.burnsfuneral.com

Ralph Gargano, age 94 of Crown Point, passed away Monday, January 17, 2022. He was born on July 6, 1927 in Hammond, Indiana to Tony and Anne Gargano. Ralph attended Hammond Tech where he learned his lifelong trade as a machinist. He also served... View Obituary & Service Information

The family of Ralph D. Gargano created this Life Tributes page to make it easy to share your memories.

Send flowers to the Gargano family.