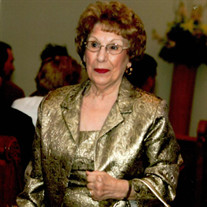 Patsy Ann nee Lustgarten (Cunningham) Miller, “Grandma” 87, of Vinemont, AL passed away at home peacefully with her loving daughter by her side on February 9, 2021. She was born on March 17, 1933 in Chicago, IL to Charles and Lilian (Vick) Lustgarten. She married Jack L. Miller. Patsy was a resident of Portage, IN for 57 years, and then moved to Michigan City for 5 years to live with her daughter and son-in-law, Darlene and Ed before moving with them to Vinemont, AL the past two years. Patsy was a homemaker for much of her life and was very involved with her church, Hope Lutheran in Portage where she served as a Sunday School teacher and Bible School Teacher. Later in life she worked in retail at several department stores. Patsy had a smile and a laugh that could light up a room, she enjoyed time spent with family and going on trips and vacations with those closest to her. Patsy was preceded by her parents and husband. Also preceding her were siblings, Arlyn (Charles) Miner, Elvera (Vern) Schmidt, Leonard Lustgarten, Robert Lustgarten, Raymond (Norma) Lustgarten, William (Pauline) Lustgarten, Carol (Darwin) Weaver, and Nancy Scharf and a grandson, Jordan Cunningham. She is survived by one brother, Ronald (Virginia) Lustgarten of Sarasota, FL; children, Douglas (Diane) Cunningham of Interlochen, MI, Darlene (Ed) Lowe of Vinemont, AL, Judith (Brian) Chelf of Godfrey, IL, and Walter (Dianna) Cunningham of Valparaiso, IN. Also surviving are grandchildren Aaron Lowe and wife Cortnie, Valarie (Chelf) Sancamper and husband Nate, Eric Chelf and companion Heather Embry, Allison (Lowe) Erickson and husband Adam, Darcy (Cunningham) Bauman and husband Mike, Darren Cunningham and wife Andrea, Matthew Cunningham, and Staci Cunningham; Great- Grandchildren Austin and Morgan Lowe, Gilson Chelf, Nora Sancamper, Colin Sancamper, Alec Erickson, Adalyn Erickson, Carter Cunningham, August Cunningham, Andrew Chelf, and Edith Cunningham; a sister-in-law Phillis Lustgarten, brother-in-law Eric Scharf and many nieces and nephews. Visitation for Patsy will be on Saturday, February 20th, 2021 from 9-10am at Graceland Cemetery in the Chapel in Valparaiso. A short service will be held at 10am in the Chapel with Pastor Jim Knauff officiating. Burial will follow at Graceland Cemetery. Burns Funeral Home 701 E. 7th Street, Hobart,IN is assisting the family with arrangements. For those wishing to attend from afar please like Burns Funeral Home and Crematory page on Facebook and on Saturday the service will stream live on their page.

The family of Patsy Ann Miller created this Life Tributes page to make it easy to share your memories.

Send flowers to the Miller family.