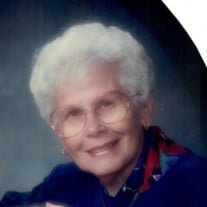 Patricia Ann Walker Wardrip, age 94, of Valparaiso (Avalon Springs Health Campus) passed away on Sunday, April 11, 2021. Pat was born on July 26, 1926 in Elwood, Indiana to Helen and Paul Walker. The family moved to Gary, IN, in 1939 Pat graduated from Emerson High School in 1943 in only three years. She met her future husband, Charles (Chuck) Wardrip, on a double date when they each took their dates home early and went out together that same night. They married on October 11, 1945, while Chuck was still in the uniform of the United States Army Air Corps. They were happily married for 62 years until Chuck passed in 2008. She is also survived by three sons: Craig (Sue) of Palos Heights, IL, Christopher (Sharon) of Indianapolis, IN and Timothy (Cindy) of Valparaiso; eight grandchildren: Jean Burr, Brian Wardrip, Thomas (Tess) Wardrip, Nicholas (Nadia) Wardrip, Danielle (Michael) Elliott, Samantha Lomax-Aguilar, Rebecca (Jeffery) James and Kaylyn Wardrip; twelve great-grandchildren: Hailie Wardrip; Marissa Burr, Garrett Wardrip, Graham Wardrip, Wyatt Burr, Corinne Wardrip, Cameron Wardrip, Gwendolyn Elliott, Peter Elliott, Gracie Wardrip, Melody James, and Grayson Wardrip, and her niece, Jennifer Flowers. She was predeceased by her husband, her parents, her brother, Robert, and her sister, Nancy. Pat was a brilliant woman, who attended the University of Arizona in Tucson, AZ, with Chuck from 1946 - 1947, until they tired of eating soup by the case – the GI Bill after WW2 was not generous! Pat and Chuck moved back to Gary in 1947. Pat gave birth to 3 boys in 4 ½ years, while also working part time at the Budd Company. In 1959 she returned to college at Valparaiso University, graduating in 1962 with a BA in elementary education. She also completed a Masters in teaching at IU Northwest. She taught second grade at Arthur P. Melton School in Gary for 23 years before retiring in 1985. Pat and Chuck lived in Gary, Crown Point (LOFS), Brown County, IN, and then back to Crown Point (LOFS). They only lived in Brown County a short while – although they loved their home there, they were too far away from the grandchildren! Pat lived at Avalon Springs Health Campus in Valparaiso for her final 8 years when she developed mobility issues. Pat was an excellent teacher, who was loved by hundreds of students. She enjoyed her family greatly, and was happy to be surrounded anytime by grandchildren, great-grandchildren and other family members who called her Grandma Pat. At Avalon Springs she was a social butterfly, who loved and was loved by the staff who cared for her. Somehow, in spite of raising three sons and a husband, she maintained her sanity and her happy disposition for her entire life. There will be no public funeral, and, at Pat’s wish, there will be cremation at the Burns Funeral Home Crematory, and her ashes will be mixed with Chuck’s. A private family memorial will be held at a later time. Burns Funeral Home, Crown Point, entrusted with arrangements.

The family of Patricia Ann Walker Wardrip created this Life Tributes page to make it easy to share your memories.