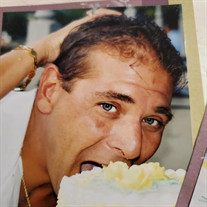 Michael &#8220;Mike&#8221; G. Danapas, age 56, of Portage, passed away June 4, 2021. He was a graduate of Edison Senior High School, and proudly served in the US Navy for 9 years. Mike was active in the Gulf War, where he earned numerous ribbons... View Obituary & Service Information

The family of Michael G Danapas created this Life Tributes page to make it easy to share your memories.

Send flowers to the Danapas family.