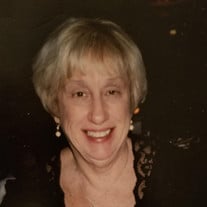 Mrs. Martha DeGryse O’Connor, 78, of Chicago, IL, passed away Tuesday, April 20, 2021, at 12:02pm. Martie was born to Charles William and Sara (O’Malley) DeGryse on December 29, 1942, in Cleveland, Ohio. Martie was the third of six siblings. Raised in Evanston, IL, blocks from Lake Michigan in “the house on Orrington”. In 1978 she and husband, Joseph F. O’Connor, moved to Chicago’s southside Beverly neighborhood. They resided for 42 years and raised four children in Christ the King parish. In 2020 she and Joe relocated to their retirement home in Hobart, IN. Martie was a graduate of Chicago’s Marywood Academy (1960), Loyola University-Chicago (Philosophy, 1964) and student of The Erikson Institute. A loving wife, mother, grandmother, sister, and aunt, Martie is remembered fondly as an engaging conversationalist. Apt to start a philosophical chat while watching her kids’ baseball games. As likely to stop her car, mid-street, to chat merrily with her Beverly cohort moms. If you encountered Martie during your day, then guaranteed, it was a memorable moment. Martie demonstrated love and respect for others through her willingness to talk to anyone. She brought forward what was unique and special about each person through her curiosity about their own and exact experience. She was an exemplar of unconditional love. She was a listener: to her children, grandchildren, nieces, nephews and others she so deeply loved. She listened to their life-choices; she supported their dreams to live the life they felt called to live. Martie felt the deep connection of heart and mind. She was an avid lover of the arts: literature, visual, performing... and most of all- music. Visitors to her home were likely to find her playing her passion on her father’s baby grand piano or listening to Phantom of the Opera, Andrea Boccelli or Celine Dion. She delighted in watching her grandchildren explore any musical and athletic pursuits. Always happy to watch a virtual violin or piano lesson or hear about the latest in their lives at school. Martie delighted in the connections she maintained. And not to be forgotten are the many pets who were Martie’s constant companions through happiness and sadness. Chloe will miss Martie more than human words can bark. Martha’s spirit will continue through her husband of 47 years, Joseph F. O’Connor; four children Paul F. O’Connor (Jana) of Portland, Oregon, Kathryn R. O’Connor (Clinton Springer) of Washington, D.C., Stephen C. O’Connor (Marielle Mershart) of Madison, WI and Julia Wright (Erik) of Chicago, IL. Her ten grandchildren Adoniyas, Gudetu, Eva, Delia, Desmond, Camille, Samuel, Louis, Ella and Sara Mae will miss her volumes of hugs and limitless conversations. She is also survived by siblings Bill (Esther) DeGryse of Lincolnshire, IL, Sally (Jack) Abrams of Manitowoc, WI, brother-in-law Kent Jamison (Thona) of Avon, CT; and Phillip (Andrea) DeGryse of Freeland, WA; many borthers-in-law and sisters-in-law, nieces and nephews. Preceded in death by her parents, brother John Paul DeGryse and sister Mary Ellen Jamison. A memorial mass will be held at 11 a.m., Monday April 26, 2021 at St. Margaret of Scotland Church at 99th and Throop St., Chicago, IL 60643. In lieu of flowers, donations may be made to WFMT Radio Chicago, a station dedicated to the best of classical music and other fine arts programming. Donors can list themselves as the recipient of notification of the gift. https://secure.wfmt.com/honor_memorial

The family of Martha Jane O'Connor created this Life Tributes page to make it easy to share your memories.

Send flowers to the O'Connor family.