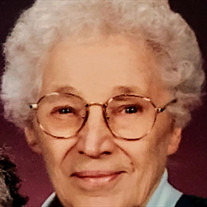 Marie Quade (nee Rolewicz) Marie Quade, 97, of Merrillville, IN, formerly a long-time Gary resident, passed away on December 27,2020 at home. She was preceded in death by her loving husband of 55 years Jack Quade, Sr, a son Jack Quade, Jr, and her 11 siblings. She is survived by her daughter, Janet McDermott of Merrillville, and two sons, Michael Quade of Fort Walton Beach, FL, and Tom (Jan) Quade of Roseville, MN; 11 grandchildren, 11 great grandchildren, and two great-great grandchildren. Marie and Jack were active volunteers in the community, devoting thousands of hours to Little League Baseball and CYO. At the Little League World Series games at Junedale field, Marie was known as the “Souvenir Queen”. Marie entered the workforce full-time when her daughter entered the newly opened Andrean High School. She was a cook/server in the cafeteria until 1987 when her loving husband “retired”, and he accepted a position in Indianapolis with Central Region Little League baseball. Indianapolis provided a new home for the couple for several years, and Marie remained in Indianapolis until she decided to come home to “da Region”. She remained independent in a cozy one-bedroom apartment in Valparaiso and was able to create lasting memories with her remaining 3 sisters and a large extended family. Marie realized it was time for her to have a roommate, so she relocated to her daughter’s house where she lived out the rest of her wonderful life. The Mass of Christian burial will be celebrated at 11 am at St. Teresa of Avila, 1511 Laporte Ave., Valparaiso, IN on Friday January 1, 2021 Family and friends viewing is for one hour prior to the start of the mass. Marie will be interned at Calumet Park Cemetery at a later date. In lieu of flowers, donations to organizations that were dear to Marie would be appreciated: American Heart/Stroke Association (heart.org), Sisters of Saints Cyril and Methodious (SSCM.org), and St Teresa of Avila (saintt.com).

Marie Quade (nee Rolewicz) Marie Quade, 97, of Merrillville, IN, formerly a long-time Gary resident, passed away on December 27,2020 at home. She was preceded in death by her loving husband of 55 years Jack Quade, Sr, a son Jack Quade, Jr, and... View Obituary & Service Information

The family of Marie M Quade created this Life Tributes page to make it easy to share your memories.

Send flowers to the Quade family.