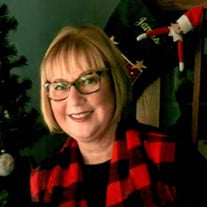 Maribeth St. Aubin February 28, 1960 -- March 11, 2021 Maribeth (Hanlon) St. Aubin’s final days were much like her life, filled with joy, laughter and social engagements. The night before her death on March 11, 2021, she entertained church friends playing Bunco and clapped her hands repeatedly talking about taking her niece to Florida, so Gracie could finally see the ocean. “It’s going to be so much fun,” she exclaimed. Then, she went to sleep and woke up in the arms of her beloved Jesus. This was her life -- her Christian faith, her family and her many friends. She leaves behind her husband of 29 years Michael St. Aubin. She was the loving mother of four children and their spouses, Nicole and James Wasmundt, Samantha and Paul Unterfranz, Mike and Ashley St. Aubin, and Trevor St. Aubin and Hillary Wolfe. She was preceded in death by her parents -- John and Katherine Hanlon and her brothers Bill and David. Maribeth learned well from her mom. The children in her family were embraced with parties, gifts, laughter and love. The home was adorned with color and the season’s trimmings. She more than overdid this task during Christmas. The reds and greens filled the walls with laughter and joy. Her grandchildren Addie and Nolan Wasmundt spent a lifetime in her living room laughing and loving their “Glammie”. And Frances Unterfranz was too young for such activity, but Maribeth held her like a golden child. These kids were not alone. “She would do anything she could to help anyone who she loved,” her husband said. He spoke of how in the preceding days the two looked into each other’s eyes and confirmed, “You are my best friend.” Maribeth had a beautiful voice and sang in the church whenever she could. “Great is Thy Faithfulness” was a lifelong favorite. One of hundreds. While many spoke of her faith and giving, there were two things never uttered. “Maribeth is a wallflower.” And “Maribeth is camera shy.” She was always the life of the party and her voice could be heard a block away. As daughter-in-law Hillary Wolfe said, “There are three things that describe Mary. She loved Jesus. She absolutely loved her family. And she loved to give unsolicited advice.” She is survived by her sisters Judy (Hanlon), Becky (Dunham), and Debbie (Hunt). Brother Steve (Hanlon), too. When talking about some of the terrible issues in the world at a gathering on Monday night, Maribeth said, “I’m about ready to go home.” Most thought it was a passing joke. But a few days later the door to Heaven would open. There have been many tears since that moment, but her family and friends can cling to what she said a few weeks before her death. “I don’t want anyone to cry at my funeral. I want it to be a party. Everyone should be smiling. Because I will be in Jesus’ arms. A visitation will be held at Bethel Church in Crown Point on Friday from 5 p.m. to 8. The celebration of life will also be at Bethel on Saturday at 11 a.m. All are welcome. Burns Funeral Home, Crown Point, entrusted with arrangements. www.burnsfuneral.com

The family of Maribeth St.. Aubin created this Life Tributes page to make it easy to share your memories.

Send flowers to the St.Aubin family.