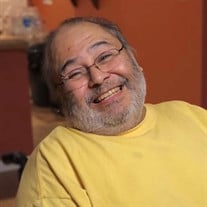 Louis M. Avila “Mike” September 16th, 1955 - November 16th, 2020 Mike, 65, of south Chicago, resided in Crown Point, IN and passed on to be with God on November 16th, 2020 after a long, hard battle that he fought. Mike was born on September 16th, 1955 to Louis Avila and Leonor Avila in Chicago, IL. He went on to attend Bowen High School and later graduated in 1974. After graduation, he continued his job at Illinois Bell, resulting in a 28-year long career. In 1973, he met Alice Marie Sanchez, and they wed in 1974, going on to have two children, NoraMarie Mollitor née Avila and Louis M. Avila Jr. After retiring from Illinois Bell in 2000, Mike spent his time collecting his comics, spending cherished time with his family and friends, and changing the tv channel maybe one too many times for football and Diners, Drive-Ins, and Dives. Mike was predeceased by Louis Avila, Leonor Avila, Alex Avila, and his beloved mother-in-law Catalina Sanchez-Jimenez. He continues to live on through his beloved wife of 46 years, Alice Marie Avila, his children NoraMarie Mollitor née Avila and Louis M. Avila Jr., son-in-law Allen Mollitor, and his grandchildren Mykenzie Avila, Mykaela Avila and Mykenna Avila. Mike will be missed dearly by his family and friends who were his life, his happiness, and his peace. He will forever live on in our hearts and be with us in spirit. Until we meet again our sweet angel, we love you. A visitation will be held on Friday, November 20, 2020 from 4 p.m. until the time of the funeral service at 6 p.m. at Burns Funeral Home, 10101 Broadway, Crown Point IN. www.burnsfuneral.com

The family of Louis "Mike" Avila created this Life Tributes page to make it easy to share your memories.

Send flowers to the Avila family.