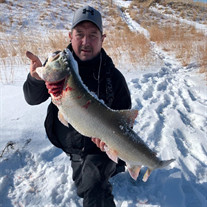 Captain Larry E. Mullins Jr. a/k/a “The Professor”, age 58 years young, of Lake Station, Indiana, previously of Seminole, Florida, passed away peacefully in his sleep on January 20, 2022. Larry was born in Gary, Indiana on 12/15/1963 to Linda and Larry Mullins Sr., who preceded him in death. Larry was an athlete in his formal school years with wrestling, baseball, and football. He was raised in Florida a/k/a the beautiful “Sunshine State”. Larry’s first true love was fishing. He worked his way up from a teenager working on the docks of John’s Pass in Madeira Beach, Florida, where all the long liner fishermen docked their fishing vessels. Larry was blessed to eventually become his own long liner vessel owner and Captain. It is named “The Black Jack II”. Larry took immense pride in his boat and everyone and anyone in the industry knew that Larry’s boat was the “one” to work on. Larry was born with a true gift for “finding the fish”! Larry handed the reigns over to his brother, Jay, whom he loved not only as a brother but in many ways like a son as well. Larry spent his retirement years with his family and chasing salmon and trout thru the streams of NW Indiana. Larry was a very kind hearted man and forgave everyone. He decided to come to Indiana 4 years ago and spend his time with his beloved mother and siblings. Larry loved his family dearly. Larry was preceded in death by his sisters- Tracy Mullins and Susan Mullin; precious mother-Linda Mullins; beloved father- Larry Mullins Sr.; grandparents-Anna and Earl Cottrell, Helen and Eugene Mullins. He is survived by his siblings- Robin (Don) Catlin, Laura Mullins, Jay (Angie) Mullins, Rachel (Mitchell) Brown; nieces,-Shelby (Joe )Munguia, Crystal Velez, Ashley Velez, Amanda (Adrian) Torres, Leanne Camel, Macy Mullins, Michaela Zingarelli, Morgan Munguia; nephews,-Zachary Catlin, Dylan Munguia, Jaycob Mullins, Jasper Mullins. Graveside service for Larry will be held at Graceland Cemetery, in the “Praying Hands Garden” section, at 11:00 a.m., on Wednesday, January 26, 2022, for Larry’s final resting place with his precious mother and grandparents. Funeral arrangements entrusted to Burns Funeral Home (Hobart). Larry will be missed immensely and our precious memories treasured forever in our heart. He was and will always be a true legend in the commercial fishing industry in the Gulf of Mexico. www.burnsfuneral.com.

The family of Larry E Mullins Jr. created this Life Tributes page to make it easy to share your memories.

Send flowers to the Mullins family.