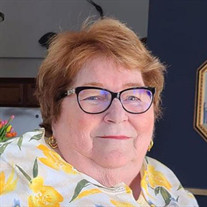 Karen Ready was the sweetest, compassionate and most altruistic mother, grandmother, sibling, daughter, cousin, and friend to all. Karen passed away peacefully on Monday, March 28th after a life filled with immense joy, sadness, loss, and fun. She found true love in her second marriage to Jack Ready and the two of them traveled, collected art pottery, and operated their family-owned window treatment business until retirement. Among her other loves were a well-appointed home, a flawlessly crafted Southern Comfort Perfect Manhattan, stylish clothing, shoes. She had quite a penchant for 18K gold and an occasional trip to Vegas to play slots and poker. She was a gourmet cook and delighted in planning complex menus and parties for every occasion for family, friends, and especially her grandchildren. Her favorite trip was a three week voyage on the giant, luxurious Queen Elizabeth 2 cruise ship! In life, Karen was an avid bridge player, pianist, teacher for the visually impaired, activist, and democrat passionate about politics and women's rights. In her 20s, she pressured Abbott Laboratories to clean up one of their toxic landfills and won. Into her seventies, she attended marches to protect women's freedoms. Karen advocated for democracy and science directly to her legislators and expressed their importance to her because she had granddaughters. Karen never missed a Chicago Blackhawks game, and she was enamored with Bill Maher and The Daily Show. Clever and full of insight, she was an extremely gifted writer, talented at mathematics, and had a profound love for period films and historical novels. As much as she spread her contagious brilliance, Karen also was deeply compassionate for others: during the 1970’s, she opened her home to high schoolers who were struggling and treated them with empathy. The door to her home was always open and her generous spirit echoed throughout all aspects of her life, a quality anyone who knew her was well acquainted with. Karen spent the final 25 years of her life in a motorized wheelchair due to advanced Multiple Sclerosis. Extraordinarily, she never complained or felt sorry for herself, in fact, as time went on, her well developed sense of humor became even more wicked, when someone she did not know randomly sexted her OMG she laughed about the text exchange for weeks! Additionally, her resilience and ability to persevere was evident to every person she interacted with—including cashiers, doctors, restaurant waitstaff, neighbors, and of course her friends and family. In Karen’s last few months, she lived for Facetime visits with her granddaughters and, despite feeling ill, she always smiled, laughed, and got more information out of them than any other person. Since 2008, Karen employed live-in caregivers that helped her with her daily life. Her caregivers brought her joy when she was sad, kept her laughing, and enhanced her life in ways that are too numerous to list. Whether it was going to movies at the theater, trips to HomeGoods, eating at the Greek Islands restaurant in Chicago, or going plant shopping to nurture her flourishing garden, her caregivers were her arms and legs when she could no longer use them. Karen passed away with her beloved “Ride or Die” daughter, Lauren, and her loving caregiver, Ewa, by her side. She is survived by Lauren’s husband, Ross Rhone, their daughters Hollister and Sarah Rhone; her caregivers Ewa Kozlowska, Roma Geidukyte, and Nemka Nergui; her brother-in-law Art Ruszenas, her niece Rebecca Ruszenas, her nephews Robert Ruszenas, Jeffrey and Eric Buffington, her cousins Gayle Bailey and Bob Roberts, and her daughter Dana, and Dana’s children Drew and Meg Sullivan. She was preceded in death by her husband John Ready Jr., her mother and father Roslyn and Robert Anderson, her sister Crystal Anderson-Ruszenas and sister Pamela Anderson-Buffington. Karen Ready’s essence was deeply compassionate, resilient, intelligent, and passionate, and she inspired, and shall continue to inspire, all who had the privilege of navigating life’s moments with her. In lieu of flowers, the family asks that donations be made to the National Multiple Sclerosis Society to further empower, support, and improve treatment strategies for individuals affected by MS. Burns Funeral Home, Crown Point entrusted with arrangements. www.burnsfuneral.com

Karen Ready was the sweetest, compassionate and most altruistic mother, grandmother, sibling, daughter, cousin, and friend to all. Karen passed away peacefully on Monday, March 28th after a life filled with immense joy, sadness, loss, and fun.... View Obituary & Service Information

The family of Karen L. Ready created this Life Tributes page to make it easy to share your memories.

Karen Ready was the sweetest, compassionate and most altruistic...

Send flowers to the Ready family.