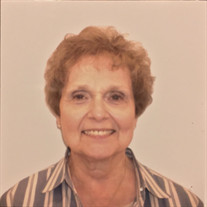 Juliana S. King (nee Sredno)   Born “Forever Young” in Gary, IN, on April 3, 1939, the daughter of Isadore and Mary Sredno, passed on September 1, 2020 after a long struggle with thrombocytosis and dementia.  She attended St Joseph the Worker School and Lew Wallace High School in Gary, IN.  Graduated from Western Michigan University with a Bachelors in secondary education (Home Economics) and gained her Master’s Degree in Education in 1968.   She taught a total of 34 years beginning at William A. Wirt High School in Gary followed by schools in Chesterton, Merrillville, Munster and finally for 18 years at Highland Middle School.  Juliana loved everyday she taught and all the thousands of students she had the chance to influence.  She was of great support and a good listener for her students, maintaining many friendships over the years.   Juliana is survived by her loving husband, John whom she married on October 10, 1964, almost completing 56 years of marriage.  The marriage was blessed with two children.  Kristen Marie (Kerry) Skelton of Minnetrista, MN and John Matthew King of Whitestown, IN.  Also survived by three grandsons: Jensen Blane, Parker Logan and Reese Morgan Skelton of Minnetrista, MN.  Also survived by many cousins in the Pittsburgh area.   A lifelong member of Croatian Fraternal Union Lodge 170 in Merrillville.  She volunteered for Meals on Wheels and started the Circle of Prayers at St Mary’s Church in Crown Point in 2010 which is a group of parishioners praying for needed intentions which is still ongoing today.   Juliana is preceded in death by parents Isadore and Mary and an unnamed brother at birth.  Per Juliana’s request cremation will be carried out and the burial will be by her parents in Calumet Park Cemetery in Merrillville, IN.   A memorial will be held on September 20th, from 5pm to 8pm at Burns Funeral Home at 101st and Broadway.  At 10am on Monday, September 21st, a prayer and rosary service will be held at Burns Funeral Home, followed by a family burial at Calumet Park Cemetery.   In lieu of flowers, if you desire, you are invited to make a donation to St Jude Children’s Hospital, Wounded Warriors or a charity for your choice in Juliana’s memory.   Please include wearing a face mask or covering in your attire and maintain the social distancing routine for everyone’s health and safety.

Juliana S. King (nee Sredno)   Born &#8220;Forever Young&#8221; in Gary, IN, on April 3, 1939, the daughter of Isadore and Mary Sredno, passed on September 1, 2020 after a long struggle with thrombocytosis and dementia.  She attended St Joseph... View Obituary & Service Information

The family of Juliana S. King created this Life Tributes page to make it easy to share your memories.

Send flowers to the King family.