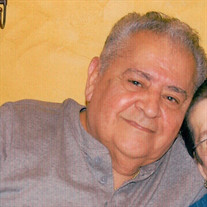 Jorge G. Batres Sr. age 87, of Merrillville, formerly of Pachuca De Hidalgo Mexico, South Chicago, and Sauk Village in Illinois, passed away on Friday June 18, 2021, at his home surrounded by his family. Jorge worked at Nashua Corporation for over 25 years and Astromet for 10 years. After retirement, Jorge spent his time woodworking and making many air looms for his children, grandchildren, and his great grandson. Jorge loved to watch international soccer, but his greatest love of sports was boxing. He had an extensive love for many genres of music, but his greatest enjoyment was to dance with the love of his life Dolores. Jorge was a devoted husband for 55 years and father for 61 years. He was preceded in death by his wife Dolores Zamudio Batres, brother Julio, and parents, Pilar and Julio Batres. Jorge is survived by his one daughter -Patricia (Douglas) Steele, two sons- Julio (Bev) Batres, and Jorge (Shellie) Batres Jr. Grandchildren, Jorge, Rachel, Samantha, Bethany, Selina, Nicole, Haley, and Anthony, and one great grandson Landon. Friends may visit with Jorge’s family on Thursday, June 24, 2021, from 5-7pm at Burns Funeral Home 10101 South Broadway, Crown Point, IN. Memorial service will follow at 7pm at Burns Funeral Home. www.burnsfuneral.com

The family of Jorge G. Batres Sr. created this Life Tributes page to make it easy to share your memories.

Send flowers to the Batres family.