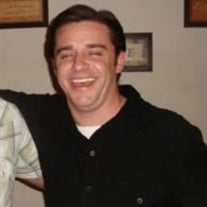 John F. McLaughlin, age 44, of Hobart, IN, entered eternal life on, August 18, 2021. John was preceded in death by his paternal grandparents, William McLaughlin and Betty Carroll, maternal grandparents, John Erler and Katherine Plenius, his father, John McLaughlin Sr., his Uncle Ed Plenius, and his Aunt Linda Erler Wuenn. John is survived by his son, Jordan D. Mclaughlin ; mother Karen Erler; brother Aaron (Ressie) McLaughlin; two sisters: Debbie (Junior) Burgess & Traci, (Ryan) Gabriel; fiancé Tanya Sullivan: two nieces, Nicole and Emilee and two nephews, Mathew and Brandon and many aunts, uncles and cousins. John was an avid Cubs & Bears fan. His family meant the world to him. He loved summertime and he loved family gatherings. He always made people smile and laugh, and was always willing to listen to whatever you had to say. He was a true friend to those who were fortunate to call him their friend. His faith in God was so very strong. He wasn’t afraid to spread the Word of God to anyone. He was so proud to be a man of God. His son, Jordan, was his pride and joy. He was totally devoted to his son and did everything he could to be the best dad he knew how to be. John will be so missed by many. A Celebration of Life will be held on Tuesday, August 24, 2021, from 2:00 p.m., until the time of Memorial Service at 6:00 p.m., at Burns Funeral Home, 701 East 7th Street, Hobart. www.burnsfuneral.com.

The family of John F. McLaughlin Jr. created this Life Tributes page to make it easy to share your memories.

Send flowers to the McLaughlin family.