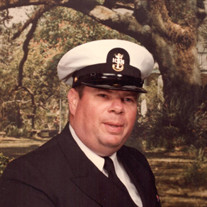 John James Lomax, Sr., age 81, of Valparaiso, passed away Easter Sunday, April 4, 2021, surrounded by his family. He was born in Philadelphia, Pennsylvania to Anne M. and James H. Lomax. John grew up in Brooklawn, New Jersey and graduated from Gloucester Catholic High School in 1957. He graduated from Drexel University with a bachelor’s degree in Electrical Engineering in 1966. On October 8, 1966 John married the devoted Diane Dorothy Cermak at the Church of the Transfiguration in Collingswood, New Jersey. He served two years of active duty in the US Navy, then he served in the US Navy reserve and retired as a Master Chief Petty Officer with a total of 28 years of service. John was a parishioner at Our Lady of Sorrows Catholic Church in South Haven, Indiana. He also belonged to Our Lady of Sorrows Council of the Knights of Columbus and also the Hobart Lions Club. John is survived by his wife; six children-Kathleen Elizabeth Nelson, Leasa Diane Sickman, John James Lomax, Jr., David Edward Lomax, Daniel Ryan Lomax and Margaret Anne “Peggy” Garner. Visitation for John will be Thursday, April 8, 2021 from 2-8:00 p.m., with a rosary service at 3:00 p.m., at Burns Funeral Home, 701 East 7th Street, Hobart. Funeral service will be Friday, April 9th, DIRECTLY at Our Lady of Sorrows Catholic Church, 356 W 700 N, Valparaiso, IN., beginning with a visitation from 10:30 a.m. until the time of Mass of Christian Burial at 11:00 a.m. Interment at Graceland Cemetery, Valparaiso. www.burnsfuneral.com.

The family of John James Lomax Sr. created this Life Tributes page to make it easy to share your memories.

Send flowers to the Lomax family.