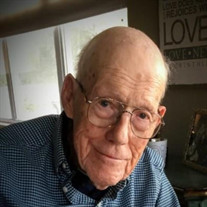 The Rev. John F. Hanlon, 97, a long-time Crown Point resident, passed peacefully in his sleep into the loving arms of Jesus, Saturday, November 7, 2020 in his Cedar Lake residence. John was a loving husband, father, papa, pastor, and a craftsman that left a legacy of service to his Savior, his community, and his family in each of those areas. John was born September, 9, 1923 in Indianapolis, IN, the son of Patrick James and Florence (Heeney) Hanlon. Growing up in the Indianapolis Haughville neighborhood, he attended Holy Trinity School, Cathedral High School and George Washington High School, where he graduated in 1940. After high school, he attended Central Bible Institute in Springfield, MO, where he maintained the college’s buses as his campus job. He graduated in 1943. From there he returned to Indiana where he worked in home missions with the Assemblies of God church. He was involved in starting new churches in small communities around the state. While ministering at a revival service, the young preacher was drawn to a beautiful musician and singer named Katherine Prohaska who performed the song, “Something Got a Hold of Me.” Something got a hold of John and the two were married six weeks later on September 1, 1947. He has said that was the best year of his life. The two soon moved to Lake County, Indiana and he started Full Gospel Assembly of God church in Crown Point. In addition to pastoring, he worked as a carpenter, a millwright, and a machinist over the years, to support his growing family while continuing his ministry. After John retired from full-time ministry, he attended Hammond First Assembly of God, Living Hope Church, and Bethel Church in Crown Point. John was not a touchy-feely man. Instead, he showed his love with his hands and tools. He could build or fix virtually everything. He replaced brakes, rebuilt engines, changed oil, fixed heaters, rebuilt transmissions, honed cylinders, replaced wiper blades and checked tire pressure to keep the small fleet of vehicles needed for a family of nine running smoothly and safely. He was also a skilled carpenter, who worked on many high-rise buildings in Chicago creating the precision trim work in the luxury offices. He often reminded his family of the need for excellence with his oft-quoted phrase “measure twice, cut once.” He was quick to help anyone, especially family, with a car repair, a home-improvement project or simply handing his children dollars when theirs ran short. In the last years of his life, he set his tools aside and took on the care-giver role so his wife, Katherine, could remain home as her health declined. When she lost her mobility, he picked the tools back up and helped his family build a wheel-chair ramp into their Crown Point residence so she could return home. He had a servant’s heart and left that legacy in his descendants. As his physical abilities diminished, John continued to study Scripture,and pray daily for each of his children, grandchildren, and great-grandchildren. John is preceded in death by his parents; his wife, Katherine; his sons John “Bill” Hanlon and David Hanlon. He is survived by his children, the Rev. Judith K. Hanlon (Glenn Richards) of West Boylston, MA, Becky (Jim) Dunham of Schererville, Maribeth (Michael) St. Aubin of Cedar Lake, Steve (Karen) Hanlon of Cedar Lake, and Deb (David) Hunt of Danville, IN. He is also survived by his grandchildren, Faith Jones, Shawn Hanlon, Kelly Hanlon, Katii Hanlon, Amy Devlin, Carrie Swett, Rachel Dunham, Bradley Dunham, Elyse Dunham, Nicole Wasmundt, Samantha Unterfrantz, Michael St.Aubin, Trevor St.Aubin, Marley Hanlon, Gracie Hanlon, Ethan Hunt and Emily Hunt. In addition, he leaves 15 great-grandchildren. A private Celebration of Life will be held on Thursday, November 19 at 10 a.m. at Burns Funeral Home, 10101 Broadway, Crown Point. . The service will be live-streamed on the Burns Funeral Home Website at www.burnsfuneral.com. Interment will be private.

The Rev. John F. Hanlon, 97, a long-time Crown Point resident, passed peacefully in his sleep into the loving arms of Jesus, Saturday, November 7, 2020 in his Cedar Lake residence. John was a loving husband, father, papa, pastor, and a craftsman... View Obituary & Service Information

The family of John F. Hanlon created this Life Tributes page to make it easy to share your memories.

Send flowers to the Hanlon family.