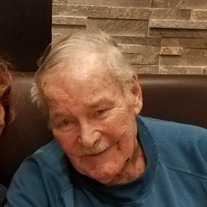 John J. Carrabine, of Dyer, IN, passed away on December 3, 2021, from AML Leukemia. John was born to Michael Joseph and Mary Ellen Carrabine in Gary, on September 28, 1939. He was the last to be born (with twin Leo) with a total of seven children that were a well-known Grocer family of the Gary east side Ohio Street area. John attended St. Luke’s primary school then to Emerson high School, where he played football and graduated in 1957. John then attended Indiana University and graduated with a BS in Business and in Psychology. He was an active member in Chi Phi fraternity. During the summers, John worked at EJ&E Railroad as a gandy dancer and with US Steel. Upon graduation, John was hired with US Steel manager’s program and spent the majority of his 36 years in the west side in cold and hot rolling products, working his way up supervisory positions from vicing foreman to retiring as Assistant Plant Manager/Area Manager. He earned his MBA from Indiana University in 1978, studying at night while working full time. After retirement from US Steel, John then worked as a technical consultant for Vulcan Oil for five years. In full retirement, he enjoyed travelling and being part of the “Dyer Dunkin Donuts mill boys of Gary Works”, where the group solved the entire world’s problems while making that franchise quite profitable. John served in the US Army National Guard for eight years in the Combat Engineers. He was an avid golfer, member of the Lion’s Club, US Steel Supervisor’s Club and on the Merrillville Boy Scouts Troop 40 committee. He was an AKC Obedience Dog handler over 20 years with his wife and had quite a number of USA and Canada national titles and championships. John resided in the Northwest Indiana area all of his life in Gary, Merrillville and in Dyer. He is survived by his loving wife, Gerrie and son, Patrick and his remaining sibling, Mary Carrabine. He is preceded in death by brothers, Richard, Eugene, Luke, Marty and his twin Leo. Services were private at John’s wishes. He will be dearly missed but never forgotten. His loud laugh will be heard by all in heaven! Burns Funeral Home entrusted with arrangements. www.burnsfuneral.com

John J. Carrabine, of Dyer, IN, passed away on December 3, 2021, from AML Leukemia. John was born to Michael Joseph and Mary Ellen Carrabine in Gary, on September 28, 1939. He was the last to be born (with twin Leo) with a total of seven children... View Obituary & Service Information

The family of John J. Carrabine created this Life Tributes page to make it easy to share your memories.

Send flowers to the Carrabine family.