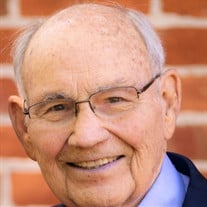 Rev. John R. Barley, age 86, of Hobart finished his race on December 31, 2020. It was a race he trained for his entire life. “I have fought a good fight, I have finished my course, I have kept the faith: Henceforth there is laid up for me a crown of righteousness, which the Lord, the righteous judge, shall give me at that day: and not to me only, but unto all them also that love his appearing.” 2 Timothy 4:7-8 He was called into the ministry at a young age and faithfully served First Church in Hobart, IN for 60 years. He took the pastorate of First Church in 1961 with a congregation of six members. Under his leadership, the church experienced great growth and an Apostolic (Pentecostal) church was established in Hobart. In 2000, he transitioned to role of bishop and remained in this capacity until his death. Over the years, he served in various leadership roles for the Indiana District of the United Pentecostal Church International. He was loved by all who knew him. He led with kindness, love, integrity and a jovial spirit, yet he had the ability to tell you what you needed to hear. He was a true Christian and had a way of impacting your heart and life like few men can. He loved his family and enjoyed spending time with them. He was their hero. He is survived by his wife of 61 years, Erma; his three children and their spouses, Gail (David) Zieba, Jonathan (Krista) Barley, and Julie (Mark) Andrews; his five grandchildren, Lauren (John) Caddell, Elliott Zieba, Ethan, Julia, and Austin Barley; and his 2 great granddaughters, Katherine and Emily Caddell; his 2 brothers Steve (Gloria) Barley and David Barley; many beloved nieces and nephews. Visitation for Rev. Barley will be held at First Church on Tuesday, January 5, 2021 from 5 pm to 8 pm. Funeral services will be held at First Church on Wednesday, January 6, 2021 at 10 am for the church family and local community and at 1 pm for minister friends, relatives and out of town guests. Flowers may be sent to First Church, 939 S. Wisconsin Street, Hobart, IN. Burns Funeral Home, Hobart entrusted with arrangements. www.burnsfuneral.com.

Rev. John R. Barley, age 86, of Hobart finished his race on December 31, 2020. It was a race he trained for his entire life. &#8220;I have fought a good fight, I have finished my course, I have kept the faith: Henceforth there is laid up for... View Obituary & Service Information

The family of Rev John R Barley created this Life Tributes page to make it easy to share your memories.

Send flowers to the Barley family.