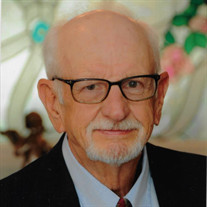 James Ervin Maresko passed away on March 18, 2021, in Colorado Springs, Colorado, surrounded by his loving family. He was 87 years old. He was born on August 18, 1933, in Gary, Indiana to Phillip Maresko and Lila Otilie Johanna Heck Maresko Dean. James married Shirley Ann Jenkins on December 2, 1960, in the Independence Hill Presbyterian Church in Merrillville, Indiana. He was baptized and a member there for many years prior to moving to Colorado in 1971. He then became a longtime member of the First Presbyterian Church in Colorado Springs. He was a 51-year resident of Colorado, residing in Woodland Park and Colorado Springs. After retirement, he and Shirley enjoyed being “snowbirds” and owned a home in Sun City West, Arizona. James served in the United States Air Force from 1952-1960, as a flight mechanic, stationed at Eglin Air Force Base in Florida. After his service, the majority of his career he was a communications specialist, working for the Illinois Bell Telephone Company in 1960, then transferred to Mountain Bell in 1971, and then retired from AT&T in 1986. One of the exciting highlights of his career was having worked inside “The Mountain” at the NORAD Cheyenne Mountain Complex in Colorado Springs. He then worked for the U.S. Government in Satellite Communications, tracking satellites at the Space Center at Falcon Air Force Base. Jim and his beloved wife, Shirley were married 59 years. Shirley was a travel agent, and this allowed them to travel the world on many memorable trips in the U.S. and abroad, including Europe, Russia, China, Mexico, and the Caribbean. They both enjoyed their time together attending all types of sporting events, both local at the USAFA, CU College and national events at various locations across the country. After retirement, Jim continued to work hard, and became vice president of his condo maintenance board in Sun City, where he worked with big improvements to the condo building and grounds, fixing leaks, roofing, patios, rocks and shrubbery on landscaping projects. He also enjoyed being a Starter/Marshall at the Golf Courses at the USAFA, Patty Jewett and Peterson AFB all in Colorado Springs. This allowed him to play on leagues at these courses as well; to spend more time doing what he loved, playing sports! James & Shirley enjoyed retirement half of the year in Sun City West, Arizona, enjoying water exercise, Senior softball and golf. He played both sports in both states, until he was about 80 years old. He always insisted on walking the golf course, instead of riding in the cart, to stay in shape. James, throughout his life, was an avid sports lover. He had a love and passion for all sports, probably because he was so good at them! He was always active in many types of sports, including basketball, golf and snow skiing; but mostly he loved softball. He was very active in softball his entire life, beginning at a very young age in Indiana. He played softball in the Air Force; he coached little league, he played Fast Pitch Softball with Mountain Bell League Team; then in Woodland Park he managed and played the Slow Pitch Softball Team. In Sun City West, Arizona, he was appointed manager of the SCW team tournament at Luke AFB. He enjoyed snow skiing with his daughter, Marla, which led to purchasing a timeshare condo in Vail, Colorado. There are so many years of cherished memories there, skiing with his children and grandchildren, and other family members and friends. He snow skiied until he was about 70 years old. We are grateful for his vision of investing in a condo, in this world-renowned location, and the family will continue to enjoy memories there, for many years to come! James was not a boastful man, so he deserves some bragging rights now that he is gone. He hit Two (2) “Hole in One’s” while golfing, one at age 66 and the other at age 73! And for being an amateur softball player, his name was mentioned in various local newspapers frequently! He hit home run, after home run, whichever team he happened to be playing on at the time. We were all proud of him; he was our own personal “Superstar”! James was humble, gentle and a soft-spoken man. He lived quietly and left us quietly. Yet, when he did speak, he was usually always funny and made us all laugh. Our family and friends will miss his sense of humor, and his smile that he always had to offer. Jim is preceded in death by his wife, Shirley, who passed in 2019. He is survived by his two daughters, Kimberly Ann Bosick, and her husband, Joseph, as well as Marla Kay Klasing and her husband, Thomas. He leaves behind grandchildren, Ryan Lee Schubert, Alexis Rose Klasing and Brandon James Klasing. Granddaughter, Kathryn Helen Schubert, preceded his death in 2013. He is also survived by 5 great grandchildren. James was 6th in his family of 8 siblings and is survived by two of those siblings - his brother, John Maresko, and wife, Diana, who reside in Shawnee, KS, and his youngest sister, June Shuttleworth, who resides in Lake Station, Indiana. A memorial visitation will take place from 10 a.m. until the time of the memorial service at 11 a.m. on Friday, September 24, 2021, at Burns Funeral Home, 10101 Broadway, Crown Point, Indiana. Immediately following is a processional to his final resting place in Calumet Park Cemetery, 2305 W. 73rd Ave., Merrillville, Indiana. This is close to where James and Shirley both grew up as children. James and Shirley will both be laid to rest appropriately, side by side, just a short mile from the church where they were married. The family is asking in lieu of flowers, donations be given to the Alzheimer’s Foundation, in hopes that a cure be found for this horrible disease that affects so many.

James Ervin Maresko passed away on March 18, 2021, in Colorado Springs, Colorado, surrounded by his loving family. He was 87 years old. He was born on August 18, 1933, in Gary, Indiana to Phillip Maresko and Lila Otilie Johanna Heck Maresko... View Obituary & Service Information

The family of James Ervin Maresko created this Life Tributes page to make it easy to share your memories.

Send flowers to the Maresko family.