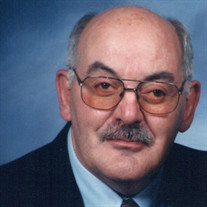 James “Cory” Gregor, age 83, of Gary, passed away September 18, 2020. He was born on November 25, 1936 in Gary IN., to Vaslav and Angeline Gregor. Cory graduated from Emerson High School, Class of 1954, and Purdue University, West Lafayette, Class of 1962. He played football while attending Purdue. Cory was employed by Lake County Welfare Department for 34 years. He married Kathleen Medved on September 4, 1965. Cory served in the United States Navy from September, 1954 to November 1956, on the submarine USS Bugara (SS-331). He will be greatly missed. Cory was preceded in death by his parents; brother-Robert; sisters-Angeline, Ruth, Mary and Helen. He leaves behind his beloved wife of 55 years-Kathy; son-Robert (Lori) of Lenexa, KS.; daughter-Karen (Chris) Salo of Greenwood, IN.; granddaughters-Libby and Sara Gregor; many nieces, nephews, grand nieces and grand nephews. Visitation for Cory will be Wednesday, September, 23, 2020, from 2:00 p.m., until time of service at 4:00 p.m., at Burns Funeral Home, 701 East 7th Street, Hobart. Cremation to follow service. In lieu of flowers, donations may be made to the Share Foundation, P.O. Box 400, Rolling Prairie, IN 46371 or to the Humane Society of Northwest Indiana, 6100 Melton Road, Gary, IN 46403. www.burnsfuneral.com.

The family of James Cory Gregor created this Life Tributes page to make it easy to share your memories.

Send flowers to the Gregor family.