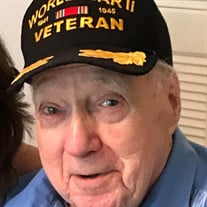 Herman Riesmeyer passed away, suddenly, at Franciscan Hospital in Crown Point, Indiana on Thursday, April 29, 2021 at the age of 96. He is survived by his daughters, Pamela Riesmeyer and Jillian (Gary) Vandermarks, daughter-in-law Amy (SerVaas) Riesmeyer, grandsons Andrew Riesmeyer and Ben (Brendan) Riesmeyer, step grandsons Dylan (Erica) Marks, Terran Marks, Asher Marks, Joey Roesler, step granddaughter Anna Roesler. Preceded in death by his wife Nancy (Moore) Riesmeyer in 2010 and his son Jeffrey Riesmeyer, M.D. April 23, 2021. Herm was born in Pittsburgh, Pennsylvania, on September 25, 1924 and graduated from Perry High School in 1942. He enlisted in the U.S. Army on February 16, 1943. As a member of the 17th Airborne Division, Herm was wounded on January 7, 1945 in the Ardennes forest, during the Battle of the Bulge. The injury earned him the Purple Heart and left him with a hip that would not bend, a disability that he refused to allow to limit his life. He graduated from Carnegie Tech University in 1950 and went to work for Clark Controller Company, selling electrical controls to heavy industry, including steel mills. His career took him to Cleveland, Ohio to Pittsburgh, Pennsylvania, to St. Louis, Missouri, and then to Gary, Indiana. After retiring, Herm became co-owner of P.K. Engineering in Northwest Indiana. Herm loved to golf and he loved to swim and fish. He built his dream home on Hermit Lake in Crown Point, in 1961, which allowed him to indulge two of those passions. He loved Big Band music, especially clarinet, and Pete Fountain. He faithfully watched Lawrence Welk and his wife sometimes felt that she competed with Dinah Shore for his attention. She need not have worried. Nancy was the love of Herm’s life. They married in 1947, and her death in 2010, after 63 years of marriage, devastated him. He instilled a strong sense of family in his children, making sure that each received an opportunity for a college education. He was devoted to his grandchildren and loved Christmas. Herm was tech savvy, fascinated by personal computing and taught himself to code and wrote his own programs, starting around 1982, with the Commodore 64. He remained fascinated by computers and technology, marveling at what iPhones could do. He loved woodworking, building furniture for all of his children and grandchildren, as well as himself. In later years, after his wife died, he spent his time working crossword puzzles. He found a website that offered 40,000 puzzles and he was determined to work through as many as he could. At the time of his death, he had completed 23,061 of those 40,000. Herm was proud of his military service and in later years would not leave the house without his cap, proclaiming him a World War II Veteran. He was grateful for the support of the Veterans Administration and the care he received at the Adam Benjamin Clinic in Crown Point. That support allowed him to remain in his home until his death. A graveside service will be held Saturday, May 8, 2021, at 1 P.M. in Historic Maplewood Cemetery, in Crown Point, with a celebration of life planned for Herm’s 97th birthday, Saturday, September 25, 2021. Herm supported many causes including Meals on Wheels of Northwest Indiana, Northwest Indiana FoodBank, St. Jude Children’s Research Hospital, and the Veterans of Foreign Wars (VFW). He would be thrilled with contributions in his name to any of these organizations. Burns Funeral Home, Crown Point entrusted with arrangements. www.burnsfuneral.com

Herman Riesmeyer passed away, suddenly, at Franciscan Hospital in Crown Point, Indiana on Thursday, April 29, 2021 at the age of 96. He is survived by his daughters, Pamela Riesmeyer and Jillian (Gary) Vandermarks, daughter-in-law Amy (SerVaas)... View Obituary & Service Information

The family of Herman H. Riesmeyer created this Life Tributes page to make it easy to share your memories.

Send flowers to the Riesmeyer family.