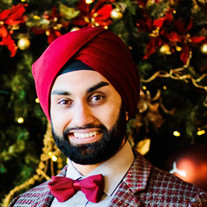 Our cherished and beloved friend Gurprit “Gopi” Singh Multani’s love of life did not come to an end with his death. Gurprit departed on Monday, January 3, 2022 at the budding age of 31 after courageously battling complications of a motor vehicle accident, surrounded by those that loved and cherished him dearly. Gurprit is preceded in death by his maternal and paternal grandparents. He is survived by his father, Iqbal Singh; mother, Charanjit Kaur; sister, Ravinder Multani; brother, Karanpaul Multani; fiancé, Navedeep Kaur; aunts, uncles, cousins, nieces, nephews, and beloved friends. Gurprit was born on July 12, 1990, in Des Plaines, IL and was raised in Palatine, IL. He spent his early childhood in Punjab, India before moving back to Illinois. During his adolescence, his family settled in Munster, IN where he graduated from Munster High School in 2008. Gurprit continued his educational journey at Indiana University Bloomington and earned a Bachelors of Science in Neuroscience, Psychology, and Biology minoring in Animal Behavioral Sciences. He then went on to pursue a Master of Science in Public Health and a Master of Science in Data Science. His passion for learning led him to also earn a Master of Business Administration in IT Management at Western Governor’s University. Equipped with a vast amount of knowledge, he went on to work at Strata Decision Technology, Tempus Labs, and founded Relic Ventures. Gurprit will be missed for his compassion and desire to make those around him feel loved and treasured. Through his words, actions, and endeavors Gurprit has made an imprint on this world that cannot be removed. He has brought joy to many and touched the lives of even more. Though most have many acquaintances and fewer close friends, Gurprit chose to keep many close friends near and dear to his heart. Gurprit sought to embrace every moment in life with his contagious laughter whilst surrounded by loved ones. He will be deeply missed - we will continue to honor his legacy by living each moment with genuine purpose and intent. A wake and cremation, for the soul to Rest in Peace, has been organized for 10:30 a.m. on Sunday, January 9, 2022, at Burns Funeral Home, 10101 Broadway, Crown Point, IN. This will be followed by Ardaas scheduled for 1:00 p.m. at the Gurdwara (Sikh Temple) in Crown Point, IN. Gurprit Singh Multani always had a yearning to learn and a desire to help those around him. In lieu of flowers, we would like to honor his legacy by encouraging donations to the One Laptop per Child initiative on his behalf. Burns Funeral Home entrusted with arrangements. www.burnsfuneral.com

Our cherished and beloved friend Gurprit &#8220;Gopi&#8221; Singh Multani&#8217;s love of life did not come to an end with his death. Gurprit departed on Monday, January 3, 2022 at the budding age of 31 after courageously battling complications... View Obituary & Service Information

The family of Gurprit Singh Multani created this Life Tributes page to make it easy to share your memories.

Send flowers to the Multani family.