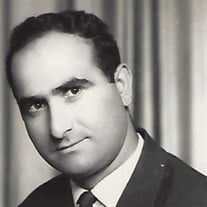 Gorgi “Jorgo” Talevski, age 85, longtime resident of Valparaiso, Indiana, passed away October 6, 2021, in Bremen, Indiana. He is survived by his beloved wife of 51 years- Ivanka Talevski, and two beloved daughters- Susie Talevski and Anita Talevski, all of Valparaiso: brothers- Kosta (Neda) and Nikola of Bitola, Macedonia, and brother Atansas (Jovanka) of Crown Point, IN. Jorgo was preceded in death by his parents-Jovan and Dominka; brother Vasco; sister- Nada; sisters-in-law- Mare and Zora; brother-in-law- Zivko; nephews- Tony and Milcho; niece- Irina: and his in-laws Kriste and Cveta. Born in Bitola, Macedonia (then part of Yugoslavia), Gorgi trained as a master carpenter during his teenage years. He then served as a seaman in the Yugoslav Navy stationed for three years on the idyllic island of Brioni in the Adriatic Sea. Afterwards, he earned a Bachelor’s degree in agricultural engineering from Saints Cyril and Methodius University in Skopje, Macedonia. After working for several years as an agronomist specializing in tobacco production in Bitola, Gorgi emigrated to the United States. Prior to departing Macedonia, Gorgi married Ivanka. He initially lived with relatives in Gary, Indiana, and secured a job as a cabinetmaker for a shipbuilder. Ivanka arrived from Bitola later that year. They welcomed two daughters within the early years of their marriage. Eventually, Gorgi secured employment at Inland Steel in East Chicago, Indiana, where he worked for nearly 30 years as a crane operator. He was a proud member of the United Steel Workers union. Gorgi also ran a small business building high-quality single-family homes, truly the greatest passion of his life. He relished creating something new and was always very proud of his craftsmanship. Even after he retired from the steel mill, Gorgi ran a small home improvement business for many years. Gorgi was known to be a compassionate, caring, and kind man. He sponsored both his sister-in-law and her family and his brother and his family to immigrate to America so they too could have better lives. In addition, Gorgi was also known to be generous with his carpentry skills and with his personal finances, he frequently helped other Macedonian immigrants build additions to their homes or finish their basements for free; he and Ivanka also helped their parents and other relatives back in Macedonia with frequent remittances. While Gorgi loved dancing, traveling and gardening with Ivanka, the hallmarks of his character were his honesty, generosity, and extremely hard work ethic to fulfill the American Dream for his cherished family. Gorgi never hesitated to be of service to those in need of his help. He truly believed in doing good for his fellow human beings. He instilled this belief in both his children, and this spirit of generosity will be his greatest legacy. Unfortunately, during the final years of his life, Gorgi suffered from dementia. Although his memory was fading, the immense love he possessed for his wife, daughters, and brothers never faded. When family members visited Gorgi, he was always overjoyed to see them and often had tears in his eyes. His memory had faded, but the love lived on. During the last years of his life, all the good that Gorgi gave to this world was returned to him by the earthly angels that came to help him during his greatest time of need. His family is eternally grateful to them. His daughters will forever remember Gorgi as their golden father (Zlaten Tatko), and a man of great integrity, honestly, and generosity. He will be profoundly missed by his family. May his memory be eternal! May he rest in peace! May he dance with the angels! Family and friends are invited to celebrate Gorgi’s life on Tuesday, October 12, 2021, at Sts. Peter and Paul Macedonian Orthodox Cathedral, 9660 Broadway, Crown Point from 9 a.m. until the time of the Mass at 11 a.m. Interment Memorial Park Cemetery in Valparaiso, IN. Burns Funeral Home handling arrangements. www.burnsfuneral.com.

The family of Gorgi Talevski created this Life Tributes page to make it easy to share your memories.

Send flowers to the Talevski family.