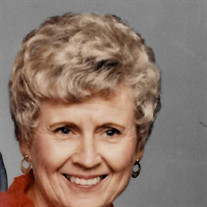 Georgia A. (nee Rich) Murphy, of Portage, passed away Wednesday, September 22, 2021, at the ripe young age of 99. She was a coal miner’s daughter, born to Valentine and Grace Rich in her hometown of Muddy, Illinois. Georgia was valedictorian of her 8th grade class and always talked of how the other girls and their parents were jealous of her achievements. She grew up working in the community, taking care of children, washing, and other household chores. Georgia later went on to work in the textile industry. In 1946, she married the love of her life, Kenneth Murphy, leading a life as a devoted navy wife, traveling the world, and raising four children: Danny, Terry, Michelle and Michael. The family later relocated and settled in Northwest Indiana. Georgia had a knack for knowing what was going on around her. She kept a meticulous home and yard, and family fondly remembers their parts in helping her achieve her visions. She leaves behind the legacy of family. She was preceded in death by her beloved husband of 48 years-Kenneth Murphy; son-Danny Murphy; parents-Valentine and Grace Rich; brothers-Archie (Red) and Harry Allen (Mike) Rich; sisters-Daisy Alldredge, Helen Swike, and Joann Haack; son-in-law-Steve Parks. Georgia is survived by her children-Terry (Sandra) Murphy, Michelle Parks and Michael (Laurie) Murphy; daughter-in-law-Becky Murphy; grandchildren-Tina (Steve) Oliver, Tara (John) Nicholson, Jason (Janice) Murphy, Amanda Murphy, Jennifer (Ron) Janes, Justin Murphy, and Nicholas Murphy; great grandchildren-Chase, Logan, Alex, Thomas, Andy, Jordan, Ruth, Joshua, Kenzie, Chloe, Samuel, Natalie, and Madaline; great-great-grandchildren-Jameson, Gage, and Skylar. Visitation for Georgia will take place on Wednesday, September 29, 2021, from 10:00 a.m., until the time of service at 12:00 p.m., at Burns Funeral Home, 701 East 7th Street, Hobart. Entombment at Calumet Park Cemetery. www.burnsfuneral.com.

Georgia A. (nee Rich) Murphy, of Portage, passed away Wednesday, September 22, 2021, at the ripe young age of 99. She was a coal miner&#8217;s daughter, born to Valentine and Grace Rich in her hometown of Muddy, Illinois. Georgia was valedictorian... View Obituary & Service Information

The family of Georgia A. Murphy created this Life Tributes page to make it easy to share your memories.

Georgia A. (nee Rich) Murphy, of Portage, passed away Wednesday,...

Send flowers to the Murphy family.