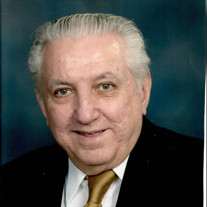 George Peter Samarzija, age 87, of Schererville, died peacefully while holding the hands of his wife and daughters on June 9th, 2021, at home. As one final act of selflessness, George passed away the day before his 60th wedding anniversary. George was born on June 29th, 1934, in Gary, Indiana to Mary Slunski Samarzija and George Samarzija. He graduated high school from Our Lady of Lake in Lake Wawasee, Indiana. He went on to become a graduate of Saint Meinard Seminary in Rockport, Indiana and fortunately for his daughters’ sake, he decided not to become a priest. He also attended DePaul University in Chicago, Illinois, to pursue a Master of Science in Biology. He worked as an Expeditor at United States Steel Corporation for 43 years and retired in 1999. Prior to that, he served in the Army in the late 1950’s. He was a member of Serra Club, the Croation Catholic Union, & the American Legion. George was preceded in death by his parents, George and Mary Samarzija; his brothers, John (Martha) Samarzija, Jack (Marie) Samar, and his sister, Ann (Mike) Kepchar, and many loving nieces & nephews. He is survived by his wife, Julie (Harlow) Samarzija; his daughters Nicole (Pete) Floody, Leigh (Ray) Sierra, his grandchildren: Jacob & Lizzie Floody, and Talia (fiancé Dylan Bradley), Nick, & Alexandria Sierra. He is also survived by many loving sisters-in-law and brothers-in-law, nieces, nephews, cousins, friends and caretakers. Visitation will be at Burns Funeral home located at 10101 Broadway, Crown Point, IN 46307 on Sunday June 13th, 2021, from 4-7pm. A funeral mass will be held on Monday June 14th at Holy Spirit Catholic Church located at 7667 E 109th Ave, Crown Point, IN 46307 beginning at 10:00am with visitation beginning prior to the service at 9:30am. Interment Calumet Park Cemetery. The family requests that in lieu of flowers, donations may be made in George’s name to Serra Club of Northwest Indiana supporting Priestly Vocations @ nwipriest.com or Hospice of the Calumet Area @ hospicecalumet.org. www.burnsfuneral.com.

George Peter Samarzija, age 87, of Schererville, died peacefully while holding the hands of his wife and daughters on June 9th, 2021, at home. As one final act of selflessness, George passed away the day before his 60th wedding anniversary. George... View Obituary & Service Information

The family of George Peter Samarzija created this Life Tributes page to make it easy to share your memories.

Send flowers to the Samarzija family.