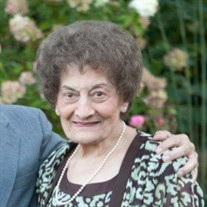 Gemma Teresa Foresta, age 95, of Crown Point, passed peacefully on July 25, 2021. Beloved mother, grandmother, and great grandmother, she will be sorely missed. Gemma was born on January 10, 1926, in San Lucido, Italy to Antonio F. and Concetta Caputo. She came to the United States when she was just 9 years old with her mother, sister, and brother. They arrived in Ellis Island, then on to Pennsylvania and eventually moved to Chicago. She remained grateful for the opportunity to be in the United States throughout her life. Gemma met her husband at a neighborhood party where her, unknown at the time, future mother-in-law was celebrating her sons returning from service in World War 2. And as love stories go, Frank asked Gemma for her hand in marriage after their second date. Soon after, they began making their home on the south side of Chicago, where they raised 5 children. She loved motherhood participating in all the kids’ activities. As she began having grandchildren, she pitched in to help with their upbringing and traveled everywhere to root for her grandchildren (and great grandchildren) in whatever sport or activity they were involved in. Gemma had a heart for orphans and supported various charities throughout her life. She was a member of Holy Spirit church and was an active member of the LOFS Fire Auxiliary. She was preceded in death by her husband, Frank R. Foresta; her sisters Vincenza Caputo, Cecelia (Bill) Christensen and her brother, Bernard (Carmella) Caputo and her daughter-in-law Sonya Foresta. She is survived by her son, Bill (Dolores) Foresta, daughter, Debbie (Scott) Albanese, sons Dave (Phyllis) Foresta, Frank (Linda) Foresta, and Tom Foresta; her grandchildren Lisa, Joshua (Caitlin), Tess (Josh), Bethany (Scott), Ryan (Victoria), Dominique (Vinnie), Zach, Mackenzie, Stephen and Trey; and 14 great grandchildren. Visitation will be held at Burns Funeral Home, 10101 Broadway, Crown Point, IN 46307 on Friday, August 6, 2021, from 4:00 pm - 8:00 pm. A funeral mass will be held on Saturday August 7, 2021, at Holy Spirit Catholic Church, 7667 East 109th Ave, Crown Point, IN 46307 with visitation beginning at church at 9:30 a.m. prior to the Mass of Christian Burial at 10 a.m. Interment at Graceland Cemetery in Valparaiso, IN. The family requests that in lieu of flowers, donations may be made in Gemma’s name to St. Joseph’s Carmelite Home in East Chicago https://www.carmelitehome.org/donate.php#donate. www.burnsfuneral.com

The family of Gemma Teresa Foresta created this Life Tributes page to make it easy to share your memories.

Send flowers to the Foresta family.