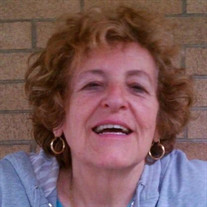 03/11/1942 – 08/01/2020 Enedina Haro de Márquez, 78, passed away on August 1, 2020 in Hammond, IN. Enedina was born in San Lorenzo, Zacatecas, Mexico to Reynaldo Haro and Guadalupe Salazar de Haro on March 11, 1942. Enedina is preceded in death by her husband Fidel, sons Rey and Rudy, brothers Luis Humberto, Reynaldo and Heliodoro. Enedina will be forever remembered by her children Fidel Jr, Irene (Thomas), Rigo (Lina) and Luis; grandchildren Megan, Michael, Matthew, Jesse, Erica, Alex, Sandra, Sonia and Aaron; brothers Ismael and Jose. Enedina will also be forever remembered by numerous nieces, nephews, cousins and extended family and dear friends. Enedina Haro married Fidel Marquez in 1960. They raised six children in Chicago, Illinois. Enedina dedicated her life to her family, especially her beloved grandchildren, most of whom she helped to raise. Enedina enjoyed telenovelas and movies from the Golden Age of Mexican cinema. Enedina also loved collecting cookbooks, although she never used one in preparing dishes. Not even her own recipes. Enedina was a devout catholic and meditated and read prayers books daily. During quiet times, when she wasn’t having visitors, Enedina was a voracious crocheter and searched the internet for new crochet patterns, which she could copy by simply looking at the finished item worn by the model. She would say all you needed was imagination. She was very charismatic. She enjoyed talking to people from all walks of life, quickly learning about their backgrounds and life experiences. Because of this, she had many acquaintances of all ages. A private interment will be held at Holy Cross Cemetery in Calumet City, Illinois. Memorial donations in memory of Enedina can be made to the Hospice of the Calumet Area, https://www.hospicecalumet.org/get-involved/donate/.

The family of Enedina Marquez created this Life Tributes page to make it easy to share your memories.

Send flowers to the Marquez family.