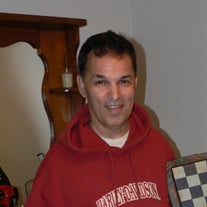 Edward Anthony Vásquez-Pérez, was born on October 29, 1950, and crossed the veil on January 23, 2022. He was born of goodly parents, Edward Hernandez Perez and Clementina (Tina) Vasquez. He is the fifth of seven children. He had loving brothers and sisters- Frederick, Gilbert, Elaine, Irene, Cynthia, and George with their respective family members. He proudly served his beloved country as a Sergeant in the United States Marine Corps, Vietnam era. He retired as a Corporal of the Hammond Police Department and is a retired parole officer of the Illinois D.O.C. He is a graduate of Brigham Young University, Provo, Utah, with a degree in Law Enforcement/Criminal Justice Administration. He served in every level of government from federal to city. In his latter years, he was an active member of the American Legion Post 924. He served a full-time mission for The Church of Jesus Christ of Latter-Days in Bolivia, South America. He also served local missions in the Savannah, Georgia stake, Valparaiso, Indiana stake, and the O'Fallon, Illinois stake. He served in the Chicago, Illinois Temple as well as the St. Louis, Missouri Temple. He is the father of three sons- Edward Charles, Aaron Anthony and Ben David. He is the grandfather “gramps” to Lucas Jensen. He was a Gospel Doctrine Instructor of the Old and New Testament, The Book of Mormon, The Doctrine and Covenants, and the The Pearl of Great Price. He held various teaching and other leadership positions within his church. He is an Ordained High Priest. Edward's parting words to those family members who survived him would be: if this is the worst experience of my life, then I've lived a "charmed" life!! Death is the only passageway to immortality and exaltation...No 2nd place finish for me. A visitation will take place on Tuesday, February 1, 2022, from 2:00 p.m. until time of funeral at 6:00 p.m. at Burns Funeral Home, 10101 Broadway, Crown Point, IN. F.O.P. service will take place at 5:00 p.m. www.burnsfuneral.com

Edward Anthony Vásquez-Pérez, was born on October 29, 1950, and crossed the veil on January 23, 2022. He was born of goodly parents, Edward Hernandez Perez and Clementina (Tina) Vasquez. He is the fifth of seven children. He had loving brothers... View Obituary & Service Information

The family of Edward A. Vasquez-Perez created this Life Tributes page to make it easy to share your memories.

Send flowers to the Vasquez-Perez family.