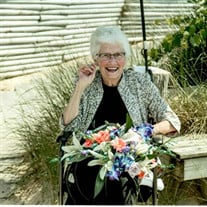 Edna Gilroy Smith, age 97 of Miller Beach, Gary, IN, passed away peacefully on Monday, February 15, 2021, surrounded by her family. She was born in Wadesboro, NC on May 25, 1923 to Edmund and Cora May Gaddy. Edna graduated from Mt. Gilead High School in NC in 1940, where she was one of 40 classmates and served as class President. After graduation she went to work as a legal assistant in a lawyer’s office; next she went to work for the Army in Lauringburg-Maxton Army Air Base in NC, where she met her husband, Jack Gilroy, of Gary, IN. They were married on April 14, 1945. Edna loved to travel to Texas in the winter, where she met many wonderful friends, including her second husband, Bill Smith, who was from Mansfield, OH. They were married September 10, 1988. Edna was special to many people, who often referred to her as our “Queen”. She was a member of the Marquette Park United Methodist Church in Miller for over 60 years, PEO Chapter O and Tri Kappa for over 50 years. Edna enjoyed watching Jeopardy every day, and her Chicago Cubs. Edna is survived by her daughter - Marsha (Gilroy) Gough; granddaughters - Kelly (Justin) Newcom, Amanda Gough; the newest sparkle in her eye, great granddaughter - Mattilyn Gough “Wee One”; nieces – Hilda (Wil) Courter and Linda Lorbacher; great nephews – Joe (Julie), John (Kristen) and David (Jennifer) Moore; great nieces-MaLinda (Bill) Speelman and Corey (Keely) Bennett; many great great nieces and nephews; special friends – Mabel Posz of IA, Bev Lindberg of MN; grandson by affection – Brent Scarpo of CA; and the many who have gone on before her. We would also like to give a special thanks to her caretakers – Angie and Minnie. Edna was preceded in death by her first husband – Jack Gilroy in 1982 and her second husband – Bill Smith in 2001; and brother-Thomas Duncan Gaddy. Visitation for Edna will be Thursday, February 25, 2021, from 2-7:00 p.m., at Burns Funeral Home, 701 East 7th Street, Hobart. PRIVATE Funeral service and burial will be held on Friday. Interment at Calumet Park Cemetery. A Memorial Service for Edna will be held at a later date. Donations may be made to Marquette Park UMC, 215 North Grand Boulevard, Gary, IN 46403. PEO, Chapter O, c/o 1012 Lake George Drive, Hobart, IN 46342, or Tri Kappa, Beta Rho Chapter, c/o 565 West State Road 8, Hebron, IN 46341. www.burnsfuneral.com.

Edna Gilroy Smith, age 97 of Miller Beach, Gary, IN, passed away peacefully on Monday, February 15, 2021, surrounded by her family. She was born in Wadesboro, NC on May 25, 1923 to Edmund and Cora May Gaddy. Edna graduated from Mt. Gilead... View Obituary & Service Information

The family of Edna Gilroy Smith created this Life Tributes page to make it easy to share your memories.

Send flowers to the Smith family.