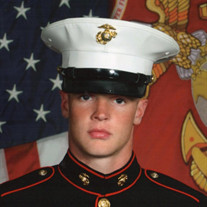 With deepest sorrow, we announce that our beloved son, Dylan R Wedel, age 23, passed away suddenly on April 15, 2021, in Jacksonville, NC. Although Dylan’s hometown of Hobart, Indiana; is where he grew up most of his childhood and graduated from Hobart High School; had been residing in Jacksonville for the majority of the last 4 years; serving his country as a United States Marine. Dylan was due to come home sometime this spring, he unfortunately will not be in the way so many of us hoped. Dylan had plans to move home where he wanted to start a career in heavy equipment operating. Upon his death he left behind his beautiful daughter, Charlotte Gene, whom he spoke to nearly every day he was gone. Although Charlotte no longer has her daddy by her side, she now forever has a guardian angel to watch over her. Along with Charlotte’s limited time with her father, Shelby (Lomax), his girlfriend and amazing mother to their child, will also miss out on years of parenting alongside Dylan. Not only did he leave behind a spitting imagine of himself, but he left behind a heart broken father, Brian, and mother, Angela (Murray); 2 younger sisters, Kaylee & Kira, and an older sister, Shannon (Babb). Dylan was also survived by his great grandparents, George (Kay) Nettles, 2 sets of grandparents, William (Carol) Wedel and Dave (Pamela) Murray; uncles and aunts, Tim (Nicole) Wedel & David (Claudia) Murray as well as his 5 cousins whom all adored him; Aiden, Carter & Brayson Wedel; and Mia & Logan Murray; as well as many extended family members and even more friends. Dylan was a young man full of life. He loved outside adventures from an early age, when he worked his way up to an Eagle Scout in Boy Scouts; to mudding in 4 wheelers and large trucks. Anyone who Dylan, knew they could find him under a hood of a truck or relaxing at a bonfire with friends. He loved country music and usually was in a pair of cowboy boots even if they had holes in them. But most of all, Dylan was known for his infectious smile. Although Dylan will be greatly missed, his memories will live on in every soul he touched. Dylan will be looking down on all of us, awaiting the day when we can all joke around again with him and see the smile on his face. Daddy loves you Boo Bear, and Mom will miss her little Dilly Bar. Friends may visit with the family on Monday, April 26, 2021 from 3-8 pm at Burns Funeral Home, 10101 Broadway, Crown Point, IN. Funeral on Tuesday, April 27, 2021 at 10 am at Burns. Interment at Calumet Park Cemetery. www.burnsfuneral.com

With deepest sorrow, we announce that our beloved son, Dylan R Wedel, age 23, passed away suddenly on April 15, 2021, in Jacksonville, NC. Although Dylan&#8217;s hometown of Hobart, Indiana; is where he grew up most of his childhood and graduated... View Obituary & Service Information

The family of Dylan R. Wedel created this Life Tributes page to make it easy to share your memories.

With deepest sorrow, we announce that our beloved son, Dylan...

Send flowers to the Wedel family.