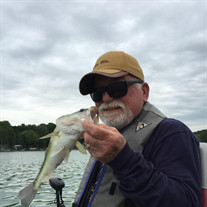 Donald Schultz, 70, of Valparaiso, died early November 8th of heart failure. He worked 30 years as a millwright in US Steel Gary Works. He volunteered as the assistant varsity baseball coach at Boone Grove and Crown Point High Schools under head coach Steve Strayer. He preferred to stay busy, which meant spending as much time fishing as he could, but also gardening with his wife, Carol, and making wooden toys for his three young grandchildren in the winter. His words of warning to his children when they were growing up were “fly right—anything you’ve ever even thought of doing, I’ve tried it, and I’ll know.” Largely, he was right—he always did seem to find out. And he had plenty of stories that made you fairly certain you didn’t ever want to try it for yourself, even if they made you laugh until your sides hurt. He could talk tough, but he was tender, kind, and always generous, especially with his time. He was a kid at heart, and cared deeply about not only his two children, but all of the kids who grew up around him. He had a way of knowing when a kid needed a lifeline, and he was a master of striking up just the right conversation. He’d take kids fishing—not just to teach them to fish, but because once you were in the boat, you were a captive for conversation. “Here’s the deal,” he’d say, “if you’re in the boat, you gotta talk.” He spent time with you so that you knew you were worth spending time with. He coached baseball for the same reason—he loved the game, but mostly he valued the time he spent with the boys. Aside from summer—because it meant fishing and baseball—Christmas was Don’s favorite time of year. He adamantly believed in Santa Claus and would argue with anyone who disagreed. If you took up this argument, you would lose: Santa Claus is a spirit, and a way of taking care of one another, and a sense of magic that we can create for each other, he’d argue. And, of course, he was right. Don and Carol were married for 49 years. He told her until the end that she was just as pretty as the day he met her, and that if he had to do it all over again, he’d choose her every time. Every morning he would ask her “Did I tell you that I love you today? No? I love you today.” Donald Richard Schultz was born in Chicago, Illinois, on February 22, 1951, to Evelyn Schultz (nee Bermingham) and Raymond Schultz. He is survived by his wife of 49 years- Carol (nee Kubacke) Schultz; daughter- Kristy (Michael) Trapani of New Jersey; son- Jonathan (Nikki Wright) of Chesterton; siblings- Beverly Barnett, Joan Fouts and Larry Schultz; three grandchildren- Julian, Ethan and Cora. He was preceded in death by his siblings- Jane Smith, Anna Mae Cayer and Raymond Jr. Visitation will be held from 10 a.m. until Mass of Christian Burial at 11 a.m. on Saturday, November 13, 2021, at St. Paul Catholic Church, 1855 W. Harrison Blvd., Valparaiso. A livestream of the service can be found at https://bit.ly/YouTubeStPaulValpo, or by searching St Paul Valparaiso on YouTube. In lieu of flowers, donations may be made to Toys For Tots.www.burnsfuneral.com.

Donald Schultz, 70, of Valparaiso, died early November 8th of heart failure. He worked 30 years as a millwright in US Steel Gary Works. He volunteered as the assistant varsity baseball coach at Boone Grove and Crown Point High Schools under... View Obituary & Service Information

The family of Donald Schultz created this Life Tributes page to make it easy to share your memories.

Send flowers to the Schultz family.