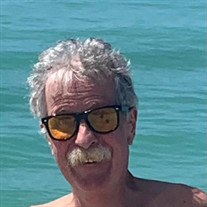 Don Kirschner, loving father and dedicated Papa, passed away Tuesday, August 24, 2021, due to declining health onset by ongoing medical issues. Don was at home and surrounded by his kids as he took his final breath on Earth. Don leaves behind his 3 children, Kristin (Luke), Megan (Max) and Chad (Denisse). Papa will be loved and missed by his 14 grandchildren:, Ben, Yaviel, Audrey, Madison, Issie, Aiden, Morgan, Rasija, Grant, Andrew, Thor, Myles, Ella and Asher. He is also survived by his step-mother, Mary Jane, mother-in-law Irene and his cat Duffy. Waiting for him above are his beloved bride Leslie, mother Theresa, father Adam and father-in-law Joe. Don served in the Vietnam War as a member of the Air Force, and upon his return, spent many years fighting and overcoming a slew of medical issues. His kids often joke that he could write his own medical encyclopedia, and compared him to a cat with 99 lives. The halls of the VA will be considerably quieter without him there to entertain his doctors and nurses. Don had a witty and often inappropriate sense of humor, and he had zero embarrassment putting that sense of humor on display on his kids’ social media posts. Don was always on the go, always looking for someone to help and something to do. He would call his girls at 8 in the morning and ask, ‘What are you doing; can I stop by?’ and then proceed to clean our houses when he arrived. Even with his declining health, he did all he could to help and parent the way he thought we needed, and to spoil our kids in ways they definitely didn’t need. In all honesty, Don lived a much longer life than his family expected, and for that we are so very thankful. Every time a new illness would try to knock him down, he would find a way to fight it. Although it would have been much easier for him to give up the fight years ago, he went through countless surgeries, treatments and appointments to ensure more time with his kids and grandkids. As hard as it is to say goodbye, we are so grateful that he can finally be at peace with a renewed body to match his spirit that never waivered, even in the darkest of times. We hope that Dad went to Heaven refreshed and that his hearing is finally in top condition, as we know Mom has 300 million stories to tell and even more questions to ask. We are sure he wore his finest flannel pajama pants and T-shirt, the staples of his wardrobe, when he reunited with his soulmate. We smile knowing they are once again together and watching over the giant family and legacy they created. We know Dad and Mom will be watching over us all (and hopefully watching over their beloved Cubbies, too, as they certainly need it)! Don’s remains will be cremated, and we will be sure to scatter some of them at The Four Winds Casino, his home away from home and where he spent all of our inheritance.😂 His children will host a celebration of life in Don‘s honor on Saturday, September 25, at 4pm at his daughter Megan‘s home. If you would like to attend, please contact Megan Adams at [email protected] for the address. Just as we did with Mom, we ask that you keep our family in your thoughts and prayers, but most importantly, we ask that you love one another. www.burnsfuneral.com

Don Kirschner, loving father and dedicated Papa, passed away Tuesday, August 24, 2021, due to declining health onset by ongoing medical issues. Don was at home and surrounded by his kids as he took his final breath on Earth. Don leaves behind... View Obituary & Service Information

The family of Donald Adam Kirschner created this Life Tributes page to make it easy to share your memories.

Send flowers to the Kirschner family.