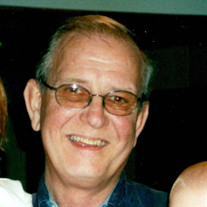 Donald (Don) O. Meece of Crown Point, IN gained his wings on February 22, 2021 at the age of 78 in the comfort of his own home. He was surrounded by loved ones. Don was born on September 21, 1942 in Gary, IN, the son of late Osby and Goldie (McIlrath) Meece. He was also preceded in death by his brothers James Albert Meece and Ronald Wayne Stout. Don was survived by his wife, Shirley (nee Shebat), whom he was married to for 56 years. His daughter Valerie (Kenny) Westell and son Stephan (Tina) Meece. He had 7 grandchildren that he loved with all his heart: Casslyn, Collin, Caleigh, Carissa Westell, Kaiden, Kaleb, and Autumn Meece. His brothers Rick (Rhonda) Meece and Jack (Donna) Meece. As well as several nieces and nephews. He was a graduate of Emerson HS, class of 60. Don was a proud veteran of the United States Army National Guard where he served six years. His passion for archery allowed him to be owner of Tru- Fletch Archery Supply in Merrillville during the 1960's. He worked for Inland Steel for 31 years, where he began as a machinist and was a computer analysist at the time of his retirement in 1993. During his tenure at Inland Steel he was a committee chairperson for ISMA he was also the chairman for the Society of Manufacturing Engineers (SME), Chapter 112. Following his retirement he worked for Kraft Pizza Co. until 2003. He enjoyed golfing, fishing, bowling, archery, and old cars, socializing with family and friends. He was very talented at woodworking, was a devoted “Grampie” to his grandkids, never missed a good meal, and was an avid collector of all things. Don enjoyed being a proud member of many clubs, in addition to SME Chapter 112, ISMA, he served as the Grand Knight of Knights of Columbus Council 4620, Gary Sportsman Club, Silver Bell Club, Winamac Old Auto Club, American Legion Post 207,and the Indian Guides where he served as Chief. He was a long standing member of St. Matthias Church in Crown Point where he enjoyed ushering. He will be loved and missed by all of his friends and family. Visitation will be held on Sunday, February 28, 2021 from 12:30 -6:30 pm at Burns Funeral Home on Broadway in Crown Point. A Silver Bell Club service will take place at 2:30 p.m. Prayers at Burns on Monday, March 1, 2021 at 9 am prior to the Funeral at 10 am a St. Matthias Church in Crown Point. Rev. James Wozniak officiating. Interment at Maplewood Historic Cemetery in Crown Point. www.burnsfuneral.com

Donald (Don) O. Meece of Crown Point, IN gained his wings on February 22, 2021 at the age of 78 in the comfort of his own home. He was surrounded by loved ones. Don was born on September 21, 1942 in Gary, IN, the son of late Osby and Goldie... View Obituary & Service Information

The family of Donald "Don" O. Meece created this Life Tributes page to make it easy to share your memories.

Donald (Don) O. Meece of Crown Point, IN gained his wings on...

Send flowers to the Meece family.