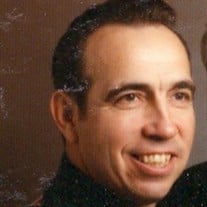 Donald R. Catlin, age 81, of Hobart, passed away peacefully, with his family by his side, on August 27, 2021. He was born on January 18, 1940, in Harrisburg, IL., to his parents-Hurley and Iva Catlin. Donald enjoyed playing basketball in his early years. He joined the Navy in 1959 and during the early 1990's, also served in the Navy Seabees Reserves. He had the privilege of performing repair work on the USS Arizona Memorial in Hawaii. Donald loved his country and was a proud patriot who served his country well. He worked many jobs, including, but not limited to, the City of Lake Station, as an EMT, a Fireman, as well as a Chaplain for 25 plus years. He also worked at US Steel, retiring in July of 2001. After his retirement, Donald enjoyed family outings. He was an avid bowler and he loved to dance to his favorite country music-"They Call me the Fireman" by George Strait. He would say "I can stomp that one out" and would also sing to Mel Tillis-"Stomp Them Grapes" and "Sawmill" (or as he liked to call it-Steel Mill). Donald loved the Lord, was a Deacon and led the school bus ministry for Lighthouse Temple Church for many years. He spent his leisure time enjoying Soduku word search games and watching sports and TV classics, with his favorite being The Andy Griffith Show. He is, was, and always will be loved and missed immensely, and the memories of his life will be treasured forever. Donald was preceded in death by his parents; the love of his life, wife-Virginia V Catlin, who he married in 1961 and preceded him in death in 2005. He is survived by his three children- Donald R. (Robin) Catlin II, of Hobart, William "Bill" N (Krystal) Catlin, of Lake Station, Jennifer (Ronald) Mardis of Michigan City, IN; grandchildren-Donald R. Catlin III, Nicole (John) Lane, Priscilla (Steven) Budkis, Crystal Anderson, Ashley Velez, Zachary J. Catlin, Ashlea Catlin, Addison Catlin, Courtney Catlin, Collin (Mercedes) Catlin; many great grandchildren; brother-Carl (late Donna) Catlin of Springfield, IL; half brother-Bob (Janet) Catlin of Louisville, KY; half sister-Joyce (Roger) Cooper of Springfield, IL. Visitation for Donald will be Wednesday, September 1, 2021, from 10:00 a.m. until the time of service at 12:00 p.m., at Burns Funeral Home, 701 East 7th Street, Hobart. Interment at Abraham Lincoln National Cemetery, 20953 West Hoff Road, Elwood, IL. www.burnsfuneral.com.

Donald R. Catlin, age 81, of Hobart, passed away peacefully, with his family by his side, on August 27, 2021. He was born on January 18, 1940, in Harrisburg, IL., to his parents-Hurley and Iva Catlin. Donald enjoyed playing basketball in his... View Obituary & Service Information

The family of Donald R Catlin created this Life Tributes page to make it easy to share your memories.

Send flowers to the Catlin family.