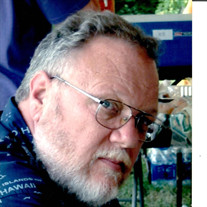 Dennis J. Schuman of Hobart, IN passed away on August 1, 2020 at the age of 75. After months of failing health, he died peacefully at home with his beloved wife Ceci and daughters Michelle and Julie by his side. Born February 17, 1945, in Gary, IN to the late Joseph Schuman and Florence Schuman (Morse). He graduated from Hobart Sr. High School and attended Indiana State University for one year before he was drafted. He served his country from January 1966 through December 1967. During this time, he was teletype operator, communications specialist and assigned to guard prisoners. While in the military, Dennis travelled to Switzerland, England, Germany and France, where he played a part in helping to set up the communications for the Paris Peace Talks. In his lifetime, he attended Hobart Presbyterian Church and the last several years Augustana Lutheran Church. His church duties in both churches included: Deacon, Elder, session and council member, and several committees in both churches. He also enjoyed getting up early on Easter morning and cooking breakfast for congregation members. His hobbies included fishing, woodworking, gardening, photography and hunting. His most rewarding job was Santa Claus, a role he played for several years until his health no longer allowed. Dennis is preceded in death by his parents. He is survived by his loving wife, Cecilia Schuman of Hobart; son, Daniel (Cheryl) Schuman of Valparaiso, IN; daughters, Michelle Heitink of Bloomington, IN, Roberta Hobson of Berea, KY and Julie (Stavro) Maroulis of Taylorsville, NC; as well as stepchildren James (Debbie) Hibberd of Virginia Beach, VA and Jeanne Marie Hibberd of Richmond, KY; sister, Jill Allen of Hobart; 3 nephews; 16 grandchildren; and his Augustana Lutheran Church family. A memorial visitation for Dennis will be Saturday, August 8, 2020 from 12:00 p.m. until the time of memorial service at 2:00 p.m., at Burns Funeral Home, 701 East 7th Street Hobart. MASKS WILL BE REQUIRED FOR VISITATION AND SERVICE. In lieu of flowers, donations may be made to Augustana Lutheran Church, N. Kelly Str., Hobart, IN. 46342 www.burnsfuneral.com.

Dennis J. Schuman of Hobart, IN passed away on August 1, 2020 at the age of 75. After months of failing health, he died peacefully at home with his beloved wife Ceci and daughters Michelle and Julie by his side. Born February 17, 1945, in... View Obituary & Service Information

The family of Dennis J Schuman created this Life Tributes page to make it easy to share your memories.

Send flowers to the Schuman family.